14 Cows for America: Collaborating and Blog-touring 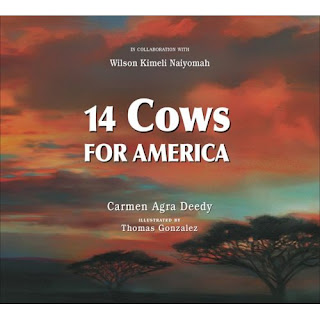 14 Cows for America by Carmen Agra Deedy with Wilson Kimeli Naiyomah, and illustrated by Thomas Gonzalez, is a stunning new book from Peachtree Publishers. Its spare lyrical prose tells the story of a young Kenyan Maasai warrior studying in the U.S. who returns to his village after 9/11. He tells the villagers about the suffering of the Americans, and they give their most precious possessions, cattle, as a peace offering, "because," Deedy concludes, “there is no nation so powerful it cannot be wounded, nor a people so small they cannot offer mighty comfort.”

I was curious about the genesis of this book and Deedy’s creative process, especially her collaboration with Kimeli Naiyomah, the protagonist of the story and so I arranged an online interview with the author.

When did you begin writing 14 Cows for America?

On April 24, 2002, I stumbled across an astonishing story on page 1A of The New York Times. It concerned a small tribe of Maasai cow herders from western Kenya, who had responded to the attacks on September 11 by offering the United States a sacred gift-- fourteen cows. The article was in-depth, and exquisitely written, and served not only to move me deeply (most Americans were still sharply affected by any reference to the tragedy in the months that followed 9/11), but also to whet my appetite for more information. Were these the Maasai Isak Dinesen referred to in her biography? Were they still the lion-hunters of legend? Were these the same Maasai who now lived on the Mara Reserve? It was clear I had a great deal of reading to do.

Fascinated, I clipped the NYT piece, shared it with friends, and soon began to collect (and to receive from others) a maelstrom of news items, articles, and transcribed interviews. Within months I had compiled something of a dossier on the Maasai, but the true story of their extraordinary gift still eluded me. The first drafts were painfully ineloquent--in truth they were dreadful.

Then, in the summer of 2007, I was offered a writing fellowship at the Carson McCullers House. It was during this hiatus that the story, much as it appeared in the final book, emerged.

When did you begin the collaboration with Wilson Kimeli? How did you communicate?

Kimeli and I spoke electronically at first, and I had to confess to him that I found it odd in the extreme to email and IM with a Maasai warrior. I discovered Kimeli to be in possession of a lovely sense of humor. When we spoke I told him that I had written a story about his part in the gift of the fourteen cows. I wanted him to see it, and let me know if he felt he could give it his blessing. I then sent the pdf and waited. I was overjoyed to hear, in his soft-spoken voice, that he was pleased with the story and would be happy to give it his support.

I invited him, with the encouragement of our wonderful publishing house, Peachtree Publishers, to be involved with the project and write an afterword. He was happy, I believe, to be invited into the process, and the book as a whole was better thanks to his intimate knowledge of Maasai mores, and the accuracy of details he brought to the story. We spoke about the text three or four other times, and participated in creative conferences with the illustrator and the publisher.

How much information did he provide?

Kimeli served primarily as a cultural consultant on the book. In other words, the manuscript was in final draft when it was presented to him. Although he did not write any of the text, he offered suggestions regarding the chronology of events, cultural details, and particulars relating to the Maa language.

He suggested that he be shown consulting with the elders before he tells the story of 9/11 to the tribe as a body--a piece that was absent from any of the news reports. Second, that his cow, Enkarus, be mentioned by name. Lastly, he suggested we use the Maa word, Aakua, in the scene where he is greeted by his mother. I think these were all useful additions. Kimeli served as a cultural consultant as the first illustrations emerged, and provided Tom [the illustrator] with his personal photographs from the day of the ceremony.

What are the advantages/pleasures of working with a collaborator?

This was not a collaboration in which two people hacked out the language of a story together. Rather I brought the writing, Tom brought the sketches, and Kimeli brought his experience as a participant in the story, and as a Kenyan from the small Maasai village of Enoosaen. Together we exchanged views, offered opinions, and listened respectfully to all that was expressed. Then we returned to our separate creative corners to incorporate changes that came out of the exchange.

Kimeli was a wonderful person to work with and I believe his involvement enriched the book. Everyone who took part in this undertaking (from editorial, to art, to marketing) wanted to create something we could all be proud of, in memory of a gesture by strangers who appeared--seemingly from the ether--in the wake of catastrophe.

Readers, writers, and publishers have mutated from words printed on paper to words and images on screens in the form of websites, blogs, internet research, do-it-yourself encyclopedias, and you-too-along-with-your-pet-can-be-a-video-star. With these new outlets, fewer bookstores, and anemic marketing budgets, the blog tour has come into its own. Peachtree Publishers has put together a 14 Cows for America blog tour for Carmen Deed and Thomas Gonzalez this week that takes them far and wide in the blogosphere. Think about it–author and illustrator reach thousands of people all over the country the world. True, you can’t autograph books in cyberspace (yet!) but it seems like a great way to launch a book. For the full itinerary of the 14 Cows for America blog tour, go to http://www.14cowsblogtour.blogspot.com/
Posted by Gretchen Woelfle at 2:00 AM

It was really interesting to read about the collaborative process for this book. It definitely sounds like the collaboration gave the author a better, more authentic product. I was looking forward to reading 14 Cows for America before. Now I'm even more interested to see it.

I don't know how I missed hearing about this story, but it sounds fascinating. My husband and I got to spend lots of time with with a number of Maasai warriors in Tanzania last fall, and cows are such an important part of their culture that the young calves live with Maasai families inside of their houses.

That sounds like a really nice book. Being a fan of illustrated nonfiction, I'll have to read it. I'll bet the collaborator was honored to take part in the process.

I remember hearing that story, and it brought both me and my sister to tears.

That's when I joined Heifer International. I want to eventually donate the equivalent of 14 cows ($7,000) in repayment for that beautiful gift.