How Do We Know The Truth - For Sure?

As David pointed out two days ago, “facts are a squirmier subject than many people realize.”

When he was four-years-old, Iqbal Masih was sold to a carpet thekedar (employer or boss) for $12, in Pakistan. Like millions – and millions – of children throughout the world, he worked long hours in a dark, airless, carpet “factory,” sometimes chained to a loom, often beaten, poorly fed. At age twelve, Iqbal was set free with the help of the Bonded Labor Liberation Front (BLLF), a non governmental agency (NGO) whose focus was liberating slave laborers. Iqbal was a remarkable boy. He became a spokesperson for the reform movement in his country and personally helped save thousands of other enslaved children. For his efforts Iqbal received the Reebok Human Rights Award. 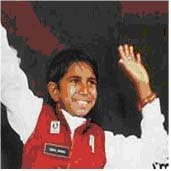 He traveled to The US where he spoke at a black tie gala, was “Person of the Week” on ABC, and made an impression with students his age in elementary schools. Iqbal returned home and was murdered.

The BLLF believed that their poster boy was a contract killing paid for by carpet dealers who were afraid that his campaign could put an end to cheap, bonded labor. Another NGO, The Human Rights Commission of Pakistan, an organization that takes on a broad range of human rights abuses, also investigated the crime. They concluded that the killer was a neighbor, high on bhang, who was caught having sex with a donkey. Yes, you read that right. Try finding language to describe donkey-love to an eighth grade audience! As the report describes it, Iqbal, his cousin, and a friend were biking down the isolated road and saw the neighbor mid act. They teased, he shot. The neighbor, in fact, confessed to the crime. Later he recanted his confession.

Both NGOs came to separate conclusions. Who was right? How do we, as writers, determine truth when it is ambiguous, or when there is unsubstantiated evidence?

A breakfast conversation with my husband:
Bailey: There’s a difference between what the truth is and how we know what the truth is. We know, for example, that Darwin published The Origin of the Species in 1859. There is no reason to doubt this fact.
Susan: But when I wrote Iqbal’s story, there was conflicting evidence, evidence that constantly changed. Also, there were special interest groups who had different stakes in the outcome.
Bailey: That’s the problem. At what point do you decide to go with one version and ignore others?

Well, writers … how do you decide? This is one of those slippery slope issues we often face. When I wrote Iqbal Masih and the Crusaders Against Child Slavery, I had access to materials from both human rights organizations. I spoke with lawyers, rights activists, and people who knew Iqbal. Still, I was unable to reach a confident conclusion. This was the first time I centered a book about a person I had never met. It was nerve wracking. For me it is far easier, safer, to interview a subjects and then write in their voices. I become the conduit for their thoughts, ideas, and experiences. Their facts are the book’s truth. Evidence does not have to be weighed to make “fact” decisions. Sure, there are some issues of truth that need to be addressed – inconsistencies and contradictions – that I may not have picked up during the interview, but I could always go back to my source. After doing interviews for No Choirboy: Murder, Violence, and Teenagers on Death Row, I found a bunch of inconsistencies. But, for the most part, I did have captive subjects. Awful pun, please forget I wrote that. At any rate, my imprisoned subjects and I wrote letters back and forth until we were both certain that what was said was exactly what was meant. Their truth was the truth I was concerned about.

Iqbal was dead and my sources disagreed with one another. What to do? I decided to write both conclusions. Writing both narratives and giving them equal weight turned out to have an unexpected benefit. The readers now had opposing material for debates. And they did. In the classroom and privately. With passion and conviction.

Darwin published his book in 1889. My husband and I had cereal and fruit for breakfast. Two truths! Who murdered Iqbal? Only the killer knows for sure.

Susan, fantastic post. I love that you gave both versions, and that made the book richer. What a great lesson for students, teachers, and writers. And fascinating reading.

Excellent post! I can relate because I write about ancient history. Even when using ancient sources, I've learned it's important to acknowledge that the writers often had political objectives of their own. My upcoming book on Cleopatra, for example, looks at why it was important for her Roman conquerors to brand her as evil, dangerous, power-hungry, and out to topple Rome when all the evidence points to Cleopatra being a smart, powerful ruler that had been a loyal client kingdom to Rome for decades. If possible, it's important to look at a source's "intention"--which is sometimes just to "say" the right thing in order to stay alive! Anyway, really enjoyed your post and learning about Iqbal and his heroic life.

Personally, I have always been drawn to the things we will never know for sure. Who shot JFK? What exactly happened to Amelia Earhart? How much wood could a woodchuck chuck if a woodchuck could chuck wood?

While sometimes it is impossible to present "every side of the story" I think you do your readers a disservice if you don't discuss what is thought by those who would know and let the readers come to their own conclusions.

Compelling post, Susan. It seems only right to include both stories about Iqbal's death and it's even better that you were able to get access to them. Ferreting out and deciphering conflicting stories is so difficult to do from afar, but I think it's imperative to try. For me, at least, fairly pinning down the differences between George Washington and King George III in my book George vs. George was hard because the King's point of view has always been so derided and has gotten such short shrift in America. But it really was worth the extra effort to dig up the info because legit or not, there are 2 sides to every story, whether they're about the Revolutionary War or any other subject where passion and political accountability hold sway.