When I’m out doing school visits or speaking at a conference, I often have people say something like “We’re glad to find you because it’s so hard to find good nonfiction for children.” At this point I try, as gently as possible, to point out that there actually is a lot of great nonfiction for children, and has been for a long time. The problem, I share, is that bookstore chains hardly carry any of it. Instead, they prefer to stock crap with appealing covers or mass-market series that do not require any kind of effort or knowledge to order. Then, (if the person or persons are still listening) I reel off names of a few of my favorite nonfiction authors and what they write about. Especially for those new to nonfiction, I thought it would be fun here to explore some of the great pioneers of nonfiction, especially science books.

First on my list is Laurence Pringle. I first met Larry when I participated in the Highlights Writers Workshop at Chautauqua back in 1988. Before the workshop, I admit I had never heard of Larry. But doing some research before flying to New York, I got very excited. Here, I discovered, was a writer working on just the kinds of books I was interested in—and thought needed to be written.

Like me, Larry studied nature as a child and in college. Later, while working as an editor of a science magazine, he decided to try writing a book about one of the Favorite Nonfiction Topics of All-Time: dinosaurs. 107 books later, he is still writing engaging, high-interest books that excite and educate children about their world. His work covers remarkable breadth, from animals and plants to probing looks at environmental and health issues. He has even written several fictional picture books.

At Chautauqua, Larry gave me guidance in his low-key, honest fashion. But his work has also inspired me from the beginning of my career. One thing I am known for is writing about scientists and their work. My book Monteverde: Science and Scientists in a Costa Rican Cloud Forest, followed scientists around in Costa Rica and shared not only their knowledge, but their adventure and personal experiences. While many considered 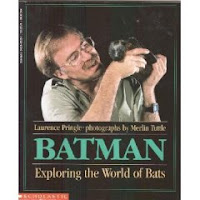 the book a breakthrough in its approach, that was only partly true. Several years before, Larry had written one of my favorite children’s books: Batman: Exploring the World of Bats. That book did something few, if any, other children’s books had done. It shared science through the eyes and personal history of an actual scientist. Monteverde, and Houghton Mifflin’s successful Scientists in the Field series are built upon Larry’s earlier, groundbreaking efforts.

Throughout his career, Larry has led similar breakthroughs in children’s writing. His award-winning book An Extraordinary Life: Th

e Story of a Monarch Butterfly traced the complete life-history of a monarch butterfly, told from the insect’s point of view. The book is not only a wonderful factual reference, it’s a model for how voice can be used to write compelling nonfiction literature. In his younger picture books, Larry writes in a simple, lucid style that never talks down to children, but always interests them. His “Strange and Wonderful” series offers a great example.

One reason Larry is at the top of my list, however, is that he also tackles tough topics: books we all know are not going to make us a fortu 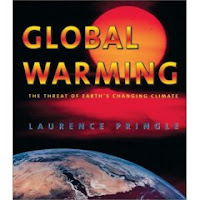 ne, but which need to be available for young readers. Long before Gore’s inconvenient truth, Larry wrote Global Warming: The Threat of Earth’s Changing Climate, a book that clearly and undogmatically gave young people the information they needed to know about this threatening issue. He’s written other books about drinking, smoking, chemical warfare—you name it.

Not long ago, Larry sent me his newest book, Imagine a Dragon. I sat down with my five year-old son and eagerly cracked the spine. Reading it aloud, I marveled at how little I’d known about these mythological creatures, and once again appreciated Larry’s simple style and comfortable voice. Even more, I appreciated the quiet, steady contribution Larry still makes not only to children’s literature, but to the health and future of our planet.
Posted by Sneed B. Collard III at 6:02 AM

Acknowledging the pioneers is a great idea, especially since "new" kids nonfiction is so recent, most are still at work today. I'll add Russell Freedman who researched his subjects as maticulously as he would any scholarly work for adults. And Jean Fritz whose biographies showed that heros had flaws instead of doing the typical whitewash that had occurred earlier.

Laurence Pringle is terrific! I'm so glad you profiled him.

Ah, there are so many great nonfiction pioneers. Of course, I am drawn to the shorter, poetic ones. I think of Byrd Baylor's books. I think of Faith McNulty's How to Dig a Hole to the Other Side of the Earth.

In the 1970s there was a surge of playful, lyrical nonfiction. I didn't find it until I rummaged around in libraries well into my career as a writer.