Creative Nonfiction at Its Best... 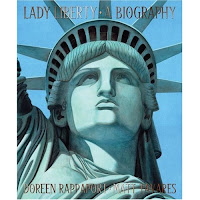 ...and more or less in tune with 4th of July partying.

Pickers of nits may have a tricky time classifying the gorgeous new picture book about our emblem of freedom-- Lady Liberty: A Biography. What is noted author Doreen Rappaport doing with these free-verse poems, in the various voices of all who had a hand in creating the Statue of Liberty? The first poem is autobiographical, describing her Latvian grandfather seeing the statue for the first time. Then, from French sculptor Auguste Bartholdi to others famous and not so famous, the voices tell a true story-- how the statue was conceived and built and what it’s meant to immigrants ever since. Here is the voice of poet Emma Lazarus: “Soon when people arrive in the New World,/they will be welcomed/by a caring, powerful woman,” Rappaport writes, segueing into Lazarus’s own invocation: “Give me your tired, your poor,/Your huddled masses yearning to breathe free…” Besides being inspirational, the poems are obviously the fruit of mountains of research, and meanwhile Rappaport has collected every possible fact you could want to know into the back matter. Somber paintings by Matt Tavares swoop from unusual angles to heighten the drama. The format is large and inviting, with a “ta-da” fold-up page unveiling the completed Lady in all her magnificence. This is history, biography, and a tribute evoking genuine emotion-- all at the same time. I would call it seriously creative nonfiction (Candlewick, ages 5-8). 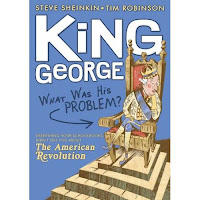 For older readers, the title alone-- King George: What Was His Problem?—may result in kids grabbing this book. The additional line of “Everything Your Schoolbooks Didn't Tell You About the American Revolution”—sounds mighty cool. Steve Sheinkin, the author of textbooks even he thinks of as tedious, has here amassed all the good stuff he claims his prim textbook editors wouldn’t allow him to use. That makes us the beneficiary of a clear, witty, fast-paced account that reads like a novel, even to the point of including some surprisingly clever dialog. Ben Franklin and grumpy John Adams, forced to share a bed one night, argue over whether the window should be open or closed. “I believe you are not acquainted with my theory of colds,” begins Franklin, lulling angry Adams into submission: “I was so much amused that I soon fell asleep.” Often one battle after another, this account might be more blow-by-blow than some kids will persist with (actually, this works well as a primer for adults). But it’s all good, important stuff that kids should know. The extensive back matter includes a “What Ever Happened to…” wrap-up of all the famous names—and a list of sources for every line of that dialog. Tim Robinson pops up with occasional sprightly black and white drawings (Roaring Brook, ages 10-14).

Guess what—I had other books I was going to include, but upon closer look, they have flaws. The children’s book world is so tiny (really) that I hate wasting space on negative reviews—even if it’s the infinite space of the Internet. 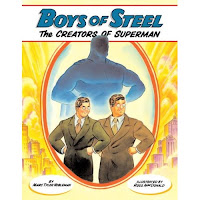 But here’s a terrific picture book biography, as tenuous as its connection to July 4th might seem-- Boys of Steel: The Creators of Superman. Possibly the most famous American cultural icon ever, Superman was born during a tough time in this country’s history. Seventy years ago, in 1938, you were either still suffering from the Great Depression or worried sick about the upcoming world war. To the rescue came two super-nerdy teens from Cleveland (who many a sensitive kid will identify with). They responded to trauma by inventing the world’s first superhero. Jerry Siegel and Joe Schuster persisted through years of rejection and later bad treatment from their publishers, searching for truth and justice as they created comic books that boosted American morale. Marc Tyler Nobleman tells his story swiftly, focusing on key dramatic moments, with a detailed afterword showing his intensive research. The stylish illustrations, in an appropriately retro palette, are by Ross Macdonald (Knopf, ages 7-10). 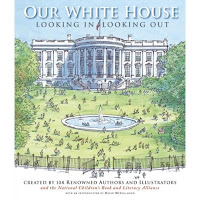 And in the realm of self-promotion, I have a one-page piece in the upcoming Our White House: Looking In, Looking Out. It keeps company with 107 other contributors-- authors (from Katherine Paterson to Kate DiCamillo to Jon Scieszka), illustrators (from Leo and Diane Dillon to Peter Sis to Brian Selznick), and famous folks (from Charles Dickens and Walt Whitman to Richard Nixon and Dick Cheney). At 242 well-designed pages, this anthology is the mother of all tributes to American history, a multi-faceted jewel for family sharing and endless uses in the classroom (to be developed on its companion website ). A few poems and short stories and plays sprinkle the mix, but mostly this is a nonfiction account of history as it affected our White House—the emphasis on our—and a call to learn more about being an American citizen (Candlewick, ages 8 and up).
Posted by Kathleen Krull at 6:00 AM

I am taking a class this summer on informational text and another on school media. Really great to see a site devoted to GREAT nonfiction. I loved the Creative Nonfiction article.