On Becoming a Videographer Late in Life (Part I)

Ever write some material you thought was a natural for the movies? What writer hasn’t? I have long thought that my collections of tricks and stunts based on science (Bet You Can’t!, Bet You Can!, etc.) were an entertaining way to introduce science to the public. I was no stranger to the camera. Early in my career I starred in my own cable show, The Science Game, and wrote and performed in 23 half hours of video. Later I did a stint as one of the original staff writers for Good Morning America. But the idea of using my own material for the small screen, hovered in the back of my mind. Over the years I had buttonholed television executives and written several proposals for kids’ science shows. I had been encouraged from time to time by interested parties but the money never changed hands, at least when it came to videos. But last year, I was approached by Skyhorse Publishing Company to create a new and very large book out of five recently out-of-print books. The editor called and said, “I loved these books when I was a kid,” (which certifies me as a senior citizen.) 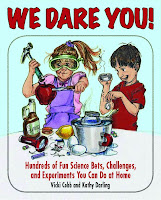 We struck the deal and this month WE DARE YOU! HUNDREDS OF FUN SCIENCE BETS, CHALLENGES, AND EXPERIMENTS YOU CAN DO AT HOME was released for sale.

Reworking that tried and true material for the new book started me thinking about making videos again. In 2001 I had hired a videographer to make a seven-minute video of me and my then ten-year-old granddaughter doing experiments to promote a science fair book published by Scholastic. I scripted the material but the videographer and her crew shot it and she edited it. I have been giving it away ever since to the schools where I make appearances. It was a good investment but it was expensive. Now I wanted to create short (under 2 minutes each) videos of kids doing these tricks and make them available to everyone on my website in conjunction with the book. How could I possibly hire someone to fulfill my vision of a video library of almost 300 tricks? The answer is obvious. Modern technology has leveled the playing field. I would learn how to do it myself and invite the world to send me uncut footage of kids doing these tricks.

I am not afraid of learning something new. In 1983, I bought my first computer, a Kaypro II. I plunged into teaching myself word processing by retyping a work in progress, a chemistry book. In those days there was no such thing as drag and drop, the mouse hadn’t yet been invented. Word processing meant that you had to format the work yourself with keystrokes. It was an intense learning period with lots of swearing and tearing out of hair. I had my own publishing company then. Here’s how our first (and only) book project went: The first month I wrote a new book and had it professionally edited. The next month I sent it out for typesetting using a modem and Dial-A-Typesetter. The third month was used to make the prepress mechanicals and we had bound books after four months. Unheard of speed, in 1983, for producing a book! That was the fun part. The book did not sell well and I received a learning experience, which is what you get when you don’t get what you want. I learned I did not want to be a publisher.

But times are different now. If you have a website you are a publisher. It would be possible for me to do it all, write videos, shoot them, edit them, narrate the voice-over, add music, and publish them on my website. The fact that I was coming from a dead start, that I had never even held a video camera could not be a deterrent. I know from experience that the steepness of a learning curve is best faced one step at a time. My next post will give you the details of how I learned this new craft, in case you’re interested. If not, and you still want to see how I did, check them out: http://www.vickicobb.com/vicki
Posted by Unknown at 6:00 AM