The Tyranny of the Spread

A few months ago I attended a seminar given by Edward Tufte on the visual presentation of data and information. Tufte is a Yale professor who has written (and designed) a number of books on presenting and analyzing information graphically. Here’s a link to his site:
http://www.edwardtufte.com/ 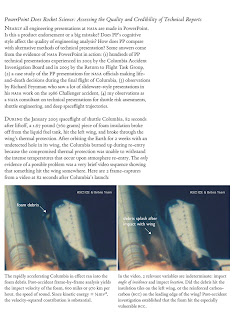 PowerPoint is one of Tufte’s pet peeves. He makes the case that people who rely on this presentation software begin to see the world in PowerPoint slide terms: a headline and a few bullet-points per concept. Not all information can be forced into this template without distortion or omission, a point he makes elegantly (if not succinctly) in his analysis of how PP presentations were, to some degree, contributing factors in the Columbia shuttle disaster. Here’s a link to that essay, for anyone interested in reading further: http://www.edwardtufte.com/bboard/q-and-a-fetch-msg?msg_id=0001yB&topic_id=1

His books are brilliant — I recommend them.

For writers, illustrators and designers of picture books, especially non-fiction books (without a plot-driven narrative to lead one from spread to spread) thinking in terms of individual spreads is both a gift and a trap. Like the PowerPoint slide, the spread allows us to present information in a very controlled context. We can choose words and images and define their relationship to the pages themselves to make create a compelling experience for the reader. Their can be a temptation, however, is to think of a book’s contents too much as a series of discrete chunks. Sometimes a single idea — one that might make the most sense presented all at once — won’t fit on two pages and has to be broken into a series of spreads. If the book's format dictates a head on each spread, this single concept may get awkwardly broken into pieces. 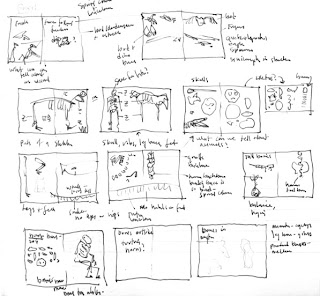 In making books I am always trying to find the balance between using the spread as a self-contained ‘unit’ of information and presenting a single, larger, cohesive story that works at the level of the entire book.


It’s interesting to look at some of the ways that what I —somewhat hysterically — called the ‘tyranny of the spread’ can be subverted.

In the book Move! (written with Robin Page, designed by Robin) a series of animals is shown, each moving in two different ways. The repetition of the animals, the anticipation of the second example (which requires a page turn) — even the use of ellipses in the text — all tend to blur the boundaries of a particular spread. The book was conceived as a kind of 32-page filmstrip.

In another collaboration with Robin (Sisters &Brothers) we use an even simpler technique, letting an image run off one spread and onto the next.

Robin Page's Count One to Ten is based on a traditional handmade Japanese folded paper book. It subverts the limitations of the spread by working as both a book and, when pulled open, as a series of panels that are visible simultaneously. 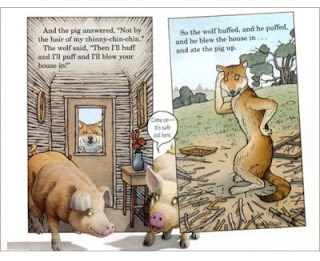 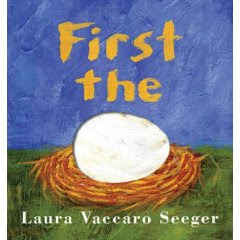 Lois Ehlert, in Color Zoo, and Laura Vaccaro Seeger, in First the Egg, ingeniously punch holes through the pages so that we see into the next spread. These books work in both directions — we can also look into the previous spread to see where we have been. In The Three Pigs, David Weisner makes the physical format of the book part of the story, so the reader becomes aware of the stucture of the book.

I’m sure there are many other examples and other ways of working within and around the limitations of the roughly 15 spreads in a typical picture book.

Thanks for the link to the PowerPoint critique... the problems he discusses undoubtedly affect government and the corporate world in general.

It is difficult to find good resources for picture book design (as opposed to page design, about which there are zillions.) There’s a chapter in Uri Shulevitz's Writing With Pictures about making a storyboard and book dummy.

The book Making Comics by Scott McCloud has a good discussion of principles such as making the choices of Moment; Frame; Image; Word; and Flow. There’s also a section about types of transitions between “panels,“ which are not the same as spreads, of course, but still relevant. Plus much more, all presented in comic book format.

One general design book I consult when in the formative stages is The Idea Index by Jim Krause. It’s funny how something that didn’t apply with a previous project (Deform; Expand; Crop) can suddenly become inspiring.