Reading Between the Lines, Part 3 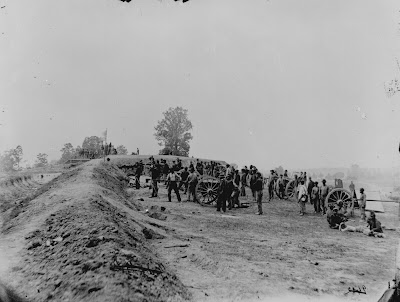 Here I will give another example from my book, Photo by Brady: A Picture of the Civil War. In doing research with photographs and other primary sources, one must always consider the source. This famous photograph (in the National Archives) is entitled "Brady Under Fire." On your screen it may be hard to make him out, but the celebrity photographer, Mathew B. Brady, is indeed in this picture, standing by the wheel of an artillery piece, wearing his distinctive straw boater. "Wow," the viewer exclaims. "That Brady risked life and limb to get his pictures of the war."
Excuse me. Just a moment, please. Consider the source! This photograph was produced and published by the Brady studio. Brady was careful to include himself in many of his famous war images -- it helped solidify his reputation as the war photographer. He created the title for the image. It could just have easily been titled "Look at Me! I'm the Dauntless Photographer Staring Into the Eyes of the Enemy!" Okay, fair enough, you might think, if he did make this image under fire why not say so? For decades this image was taken on faith as just what it was called.
However, photographic historians have debunked the photo and they did so without breaking a sweat. The technological constraints of photography in this period were such that figures were required to stay motionless for several seconds -- as much as thirty seconds depending on light conditions. Although you probably can't make it out on your screen, the U.S. flag in the background is blurred, showing that it was flapping in the wind during the exposure of the picture. And yet all the men are clear and unblurred, meaning that they held still for the picture.
Now think about it: can you imagine a crowd of some two dozen men standing perfectly still for the period of time required to compose the image and make the exposure -- during an artillery bombardment? Oh, Mr. Brady, you humbug! This picture is a publicity stunt worthy of your friend, P.T. Barnum.
Reading between the lines becomes easier with practice, and it also becomes easier with more specialized knowledge. Without knowing how photographs were made in the Civil War you might not be able to deconstruct this picture. But if you have the facts and you consider the source -- aha! You discover you have a document that is interesting in a very different way than what you thought you had at first. Facts and logic are two indispensable tools for writing nonfiction. Consider the source!
Posted by Jennifer Armstrong at 8:45 AM

Having studied photography in college I have long been aware of the "composed" nature of early photography. I don't think I ever gave Brady much thought but I'm not surprised to know the scene was staged.

Unfortunately, these same "proofs" are often used to debunk inconvenient truths in more modern work. There are those who contend that the moon landings were faked and point to similar details as proof. (Personally, I think we need to send the doubters and flat-earth-ers on a shuttle mission and see what they say).

I think David's right - those who've grown up in the digital age (and many of us who are older but have manipulated images ourselves)are likely to be cynical about what they see. The interesting question is whether this is a good or bad thing. Moon landing deniers notwithstanding, my own feeling is that a healthy bit of cynicism may not be so bad - perhaps it makes it a little more difficult for those who'd manipulate reality for narrow political or financial advantage.