I am not a fearless woman. I’m actually quite timid. I like order and predictability and rules. When I was a magazine editor, I started each editing task by making sure the fonts and margins and other formatting issues were right. Only then could I tackle the content. 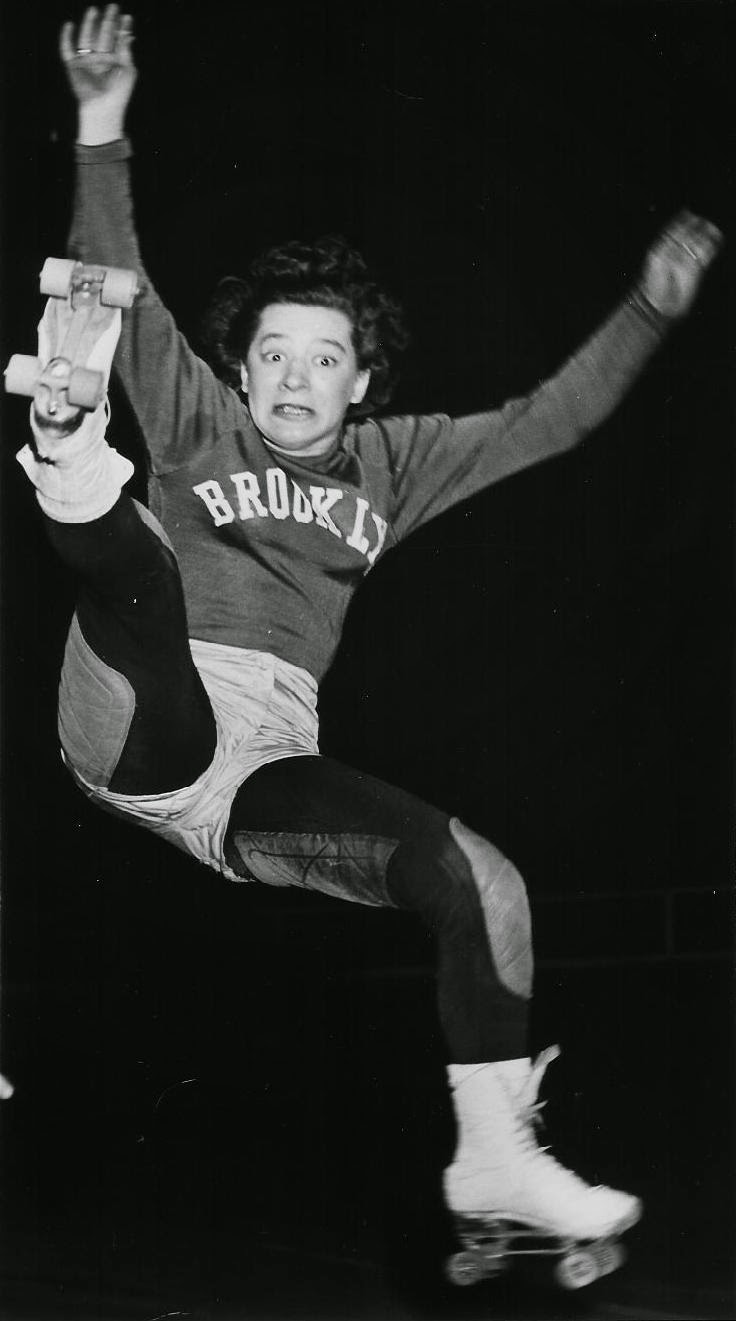 I’ve been thinking about this lately because in the author bio of my most recent book, Roller Derby Rivals, my editor at Holiday House wrote, “Sue Macy loves to write about sports and fearless women.” And it’s true. Nellie Bly got herself committed to an insane asylum so she could write an expose. Cyclist Dora Rinehart rode more than 17,000 miles in 1896 through the muddy, rocky, mountain roads around Denver. Midge “Toughie” Brasuhn (right) regularly careened around Roller Derby rinks with no concern about injuries—and ended up with eight broken noses during her career. To me, these accomplishments are alternately inspiring and terrifying.

As someone who was trained as a journalist, I find it perfectly acceptable observing and writing about fearless women while remaining out of the fray myself. I am moved by women who have the drive and determination to overcome society’s taboos or their own fears in order to follow their dreams. I’ve listened to scores of women who played in the All-American Girls Professional Baseball League talk about their motivation, and the common thread among all of them is the passion they had for the game. Over and over again, they’ve said, “They were paying me, but I would have played for free.”

When people are really passionate about what they’re doing, they grab my attention. At the start of my research on Roller Derby history, I went to a contemporary bout between the Garden State Rollergirls and a visiting team from Maryland. I barely knew the rules of the game at that point. What’s more, the announcer was muffled by an inadequate sound system and the action was so fast and furious that it was hard to follow. But one woman stood out. She was a New Jersey skater, covered with tattoos on just about every visible patch of skin, and she was magnificent. She wove in and out of the opposing skaters, lapping the field and then passing her opponents to score points. Her Derby name was Jenna Von Fury and her skill convinced me that Roller Derby was indeed a sport worth writing about.

Late last year, the computer search engine Bing produced an awesome TV commercial highlighting some of the female heroes of 2013. To the tune of Sara Bareilles’s song, “Brave,” Bing celebrated several fearless girls and women, among them the young Pakistani activist Malala Yousafzai; marathon swimmer Diana Nyad; and Edie Windsor, who brought the Supreme Court case that that struck down a portion of the Defense of Marriage Act. It was an impressive example of the never-ending parade of fearless women whose achievements have made an impact on the world, and a virtual shopping list of topics for a writer seeking to be inspired.

So as I finish my final post for I.N.K., I promise to continue producing books about women who made their mark as they challenged the status quo. I'll also occasionally blog on my Web site, suemacy.com. Check it out when you get the chance. Or follow me on Twitter @suemacy1. And thanks for reading.
Posted by Sue Macy at 12:15 AM

Cynthis Ozick is famously quoted as saying, "If we had to say what writing is, we would have to define it essentially as an act of courage."

So maybe that is to say that--you're a whole lot braver than you think!!

Your brave women all craved an audience, and you've given them a broader one beyond their times. Brava, Sue!

Thank you for writing, Sue Macy. Thank you for wielding your trusty keyboard & using it to face down the blank-staring monitor & filling it up with tales of genuine courage. You've done your valiant part in making sure that these women's stories are not lost, bless your heart & mind. We bumble onward.