Last July 8, a Cairn terrier came into our lives. We had been without a dog since Tinka, our beloved Golden Retriever, died in 2004. While in Pennsylvania for a party, we heard about a dog who needed a home, and even though we debated for seven years whether or not we could have a dog in the city (we lived in Bucks County, PA, during the Tinka years), we have not looked back. Ketzie is, as I tell her often, a value-adder in our lives.
There is only one time when I feel at all doubtful about Ketzie. And that's the last walk of the night. Not because I'm too tired, but because the last walk of the night has become THE RATTING WALK.
Before you get too grossed out (or maybe too excited), see below for one of the cuter aspects of the dog being a ratter. Here she is hiding under our bed. "Hiding." Why is she hiding? She has a new toy bone, and she doesn't want us to get it. OR rather, she'd like for us to try to get it, but she wants to put up a fight. She knows it is safe under there. 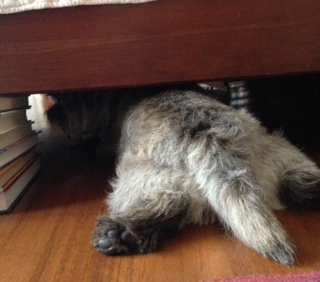 (Why are there books there? Our bed is a little bit broken. Until we can get our friend Keith to make us a new one, we have to prop it up with something. We have more books than we have space for, so.....)

Where we lived in Pennsylvania, there were mice and moles and skunks and deer. Where we live now, there are rats. Mostly they are hidden. But once in a while, at night, one will scamper across the street or sidewalk in front of us. While my instinct is to jump back, Ketzie's instinct is to become very alert. She assumes a posture we don't see any other time: alert in every cell of her body. It's as if her ratting genes coming to ATTENTION. Cairns were bred to get rats out of cairns (or maybe, truly, out of homes made of stones). And at night, just outside our lovely apartment building, Ketzie is ready to be OF SERVICE.

I don't think we're going to train her to be on the rat-hunting squad.  Yes. There is a rat-hunting squad in NYC and that link is to an article and a video about it. Please watch the video. It's only a minute and a half, and so worth it. I'll wait until you come back.

Right? Ketzie really should be on that squad. But considering every night we're (husband and I) terrified she will catch a rat, I don't think it is in her future.

When we have to force her to come back inside--Cairns are stubborn!-- I feel like we're thwarting her most basic nature. Which makes me sad.

Tinka, our Golden, did not understand fetching in our Buckingham back yard. But the first time we threw a stick into the ocean, in Nova Scotia, she swam in, retrieved it, and laid it at our feet. Another clear sign of genes being able to express themselves.

As parents and teachers and writers it is our job to help kids find their true selves. To help them express who they are, who they were meant to be. People who live their lives letting their innermost selves guide what they do are the ones we admire the most. Often those people have to fight inner and outer battles to do so. Paul Erdős was one of those people. He was so lucky that his mother (and later his father) nurtured his love of math, and understood his true nature. Mama let Paul be home-schooled until he was ready for school. She challenged him with math from the time he showed the great interest and ability (when he was four). Later on, the love and support he got from his parents, and the great foundation he had in math, allowed him to go out into the world--on his own terms.

(Shameless and excited plug: THE BOY WHO LOVED MATH is coming out next Tuesday. Check out my website for news, etc.)

Even if we are not math prodigies or ratters or retrievers, we each have inborn strengths and talents that should be nurtured. We each have problems to overcome; everyone has to learn strategies for how to fit into the world. Some, like Paul Erdős, have more of a challenge than others. But with adults in their lives who understand their needs, they have a greater chance at success and a happy life.

As parents, teachers, and dog-owners, we do the best we can. Even though I don't let Ketzie go after rats, I do buy her a new toy every time she destroys her current favorite. I think--I hope--that along with about an hour and half's worth of walks every day, good food, and lots of attention, that's enough. She seems pretty happy, and at home. 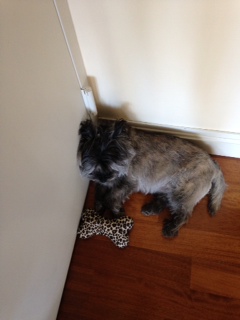 Posted by Deborah Heiligman at 4:00 AM

So cute! And your pups have inspired many stories and essays! I suspect many more books and stories are on the way!

So cute! And your pets have inspired so many essays and books -- I'm sure there are more on the way, too!