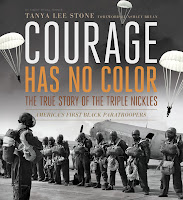 I don’t often post about my books, but I am very excited that Courage Has No Color will launch on Tuesday, January 22nd! This is a story I started way, way back in 2003. It took ten years for me to figure out the best form for the story and accurately put all the pieces together.

This is the true story of a very little-known group of men who should be as familiar to us as any other groundbreaking group of pioneers. Led by Walter Morris, these WWII soldiers who were serving guard duty in the Army became the first black paratroopers in World War II. They also integrated the Army many months before integration was ordered AND helped fight an attack by the Japanese on the American West. Yes, you read that right.

There are a lot of personal reasons why this book has become close to my heart—23 reasons, in fact—all 17 men and 6 officers who became the first to blaze this trail. Walter Morris is at the top of that list, a man I have grown to love and am proud to call my friend. He will be 92 next week, and the minute the box of freshly bound books hit my stoop, I packed one up for him. It is beyond thrilling—after talking with him for ten years—to be able to put his own story into his hands, complete with the more than 100 photographs it took me a few years to gather. Black-and-white-and-sepia-toned needles in a myriad of haystacks. Finding them was a whole other story. Thank goodness for helpful archivists in obscure locations and engines like Zabasearch, without which I could not have found scattered relatives of soldiers who passed on long ago.

This is my second book with Candlewick, and I am so fortunate to have an amazing team to work with there. I am also happy to be able to share the brand new book trailer. The young man you will hear doing the voice-over won 2nd place in the National Poetry Out Loud contest last year, and happens to be local to me. It was wonderful to bring him in for the project.

The wonderful and beloved Ashley Bryan also became an important part of this book. He first read the picture book version in 2003 and we had poignant conversations over the years on the subjects of war and discrimination and art and joy. He read the manuscript of what became this book about a year ago and wrote the Foreword. Incredibly, he also shared his own artwork that he made during the war, when he was a stevedore in the Army. A few of those pieces now grace the pages of Courage Has No Color.

Thank you for indulging me today, as I do some blatant self-promotion, but it’s not all that often you get to shout from the rooftops that a new book baby is born! Oh, and there will be a Reading Guide for this title soon, which will include suggestions for use with Common Core.

Congratulations, Tanya. And no need to apologize for tooting your own horn! I'd like to hear more about your picture research and how you came up with that great title.

Tanya, I can't wait to read this book. It sounds fascinating. Congratulations!

How fabulous, Tanya. Sounds like a great project, and a thrill to finally have it out there.

Congratulations, Tanya. Looks like a great book - I'm looking forward to reading it!

I think it's great to show readers how books like this one are crafted. This is a terrific, meticulously researched story that deserves to be read; yet another reason why people should find out about remarkable nonfiction books like yours.

Tanya, what a terrific book - and a splendid post. I thank you for both.

Tanya, sounds fascinating and what agreat title. P.S. I posted a comment a day or two ago and it seems to have disappeared. ????

I am reading the book right now and learning about things I never knew. This is clearly the kind of story that children should read.

Have it on my list to read right now. I've had several students interested in this topic, so will look forward to it!