I was going to write about outlining today -- a discussion of how, for me, what we teach about writing doesn’t address how I write. But this I.N.K. blog, which sometimes can seem like a chain of unrelated, individually-crafted essays, is really a conversation about writing and the world we write about. In the face of reading Cheryl Harness’ and Deborah Heiligman’s eloquent and heartfelt Monday and Tuesday blog posts about Sandy Hook Elementary School, I feel that jumping off into an entirely different area isn’t going to work for me.
Sandy Hook is five miles from my house. Just about halfway in between is Newtown’s Ferris Acres Creamery, a paradise of green meadows, cows and ice cream where I (along with the rest of the neighborhood) spend way too much time. Half the fun is the people watching -- babies and puppies and “kids with the jitters in their legs and those wide, wide open stares,” in the beautiful words of Joni Mitchell. Parents and grandparents and people on motorcycles... You get the idea, and you know where I’m going with this: what happened, happened to those people I see at the Creamery, and in the library, and at the comic book store and movie theater. While I feel unequal to the task of figuring out what to say, I know that when you’re grieving just having someone say they don’t know what to say is a balm, so consider it said.
This past September, I went on a whale watch, shadowing Joanne Jarzobski, a Cape Cod high school biology teacher and naturalist. Joanne is the person at the front of the whale watch boat on the microphone who tells you whether the shadow in the water is a humpback or a finback or what. She’s the first to spot a spout or a fin or a fluke,  indicates where whale watchers should look (one o’clock? five o’clock?) to get a glimpse, and is usually able to provide a whale’s identity and even a little biography, employing an internal database (as well as an external one) of identifying features.
The veteran of more than 1,600 whale watches, Joanne draws on her own experiences and those of a network of other naturalists in sharing and spreading understanding of animals that live mostly out of human view.  I have a sense that she is never completely back on shore; part of Joanne is always out at sea, and her imagination takes her under the sea. When I talk to her, check her Facebook page, check a fact for the book I’m writing about her, I see that Joanne is often right about the whales -- and often surprised, too. 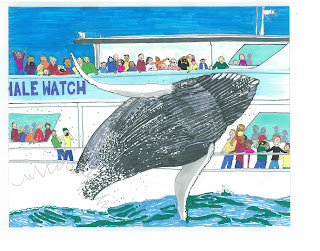 Even those with the most knowledge, it seems, are subject to wonderment about what is actually going. on. When I ask Joanne why a whale follows the boat or jumps out of the water or hangs around one spot in the ocean or migrates a thousand miles south, she often shrugs. Like the biologists who spend their lives studying whales, she recognizes the limits of human knowledge about whales. We may know more than we’ve ever known, but that’s still not saying much.
Yes, we know that whales’ ears -- and behavior -- appear to be affected by loud noises from ship engines and sonar booms in the sea.  We know where some of the whales go over the course of the year -- but not where they all go, nor all of the reasons why they migrate.  We know that different pods of orca have different feeding practices, comparable to the different ways families cook their Thanksgiving turkeys.  But what scientists are seeing -- and naturalists are interpreting -- and writers and illustrators try to convey -- is only part of the story.
This isn’t what you’d call a profound or original observation on my part. Consider the proverbial tip of the iceberg that is only mildly indicative of what lies beneath. Consider the blind men who examine the elephant and extrapolate that it is, alternately, ropy like its tail or stumpy like its legs or floppy like its ears. My message gets at what  the essence of science writing is for me: how complex and deep and inaccessible and humbling the world is. How continually I feel like I know nothing. How difficult it is to talk about something enormously misunderstood or under-understood. How you wind up talking about questions, not giving answers.
It’s science, but it’s also life. How many of us this week have pored over the reports from Newtown, Connecticut, trying to divine the dark mystery, the great why, the answer to the questions that seems to lie invisibly between the photographs of people crying, descriptions of the local Christmas tree lighting, quotes from the neighbor or the cousin or the friend? At the same time that we criticize the media for intruding on this stricken, grieving community, we cannot ignore and even seem to need their stories and pictures. How else can we try to understand the enormity of life, other than by the glimpses they provide?
So we writers follow people or events or ideas around, trying to explain, humbled by our subjects, obsessed with the questions, and aware that we’re not the only ones trying to answer them.

Posted by Karen Romano Young at 6:00 AM