It was nearly five years from proposal to publication, but now I'm finally holding Master George's People in my hot little hands. To say I'm pleased with how it turned out is an understatement—I'm over the moon! Lori Epstein's stunning photographs are a big reason why. So is the beautiful, powerful design created by National Geographic's Jim Hiscott. Both were true collaborators on this project. Back in June, I wrote in INK about our photo shoot with Lori at Mount Vernon, George Washington's Virginia plantation. Today I asked Jim if he would share with us his process of designing the book. 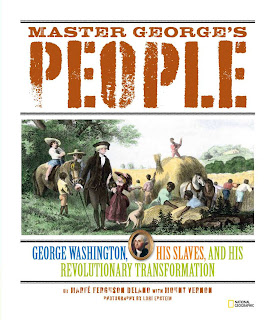 What look and feel were you striving for with the cover?

Jim: The initial design construct, at least in regard to the typography, came from the idea of broadsides used for the search and capture of runaway slaves, utilizing a blocky and distressed typography. In fact in the title, "Master George's People," there are two different styles that work in concert with each other, one an extended serif font and the other a condensed stencil style. The counterpoint to this is the use of a more elegant and refined condensed serif display font for the subtitle and the large cap indents that launch each chapter. The use of the distressed rules on the cover and the interior was another reference to newspapers and a graphic approach of the period.

How about the inside of the book? The little decorative doodads at the end of the picture captions have a colonial feel to me. Were you aiming to create a sense of period with this and other design elements?

Jim: The overall design tenet I always use, no matter the style, is to create contrasts between things, elements, no matter what they may be, as a way to create energy, impact, and tension. For this book I wanted to reflect the contrast between these two worlds—that of George Washington and the refined manners of the day compared to the life of slaves. Hard/soft if you will. And by using color on the cover as well as on the inside, it was a way to be respectful of the NGKids brand while also trying to create a look that was respectful of two periods of time—present day and the Colonial period. This all helped to give the book a certain dynamic that allowed me to present it in a strong, elegant, and sophisticated manner that hopefully feels contemporary as well. 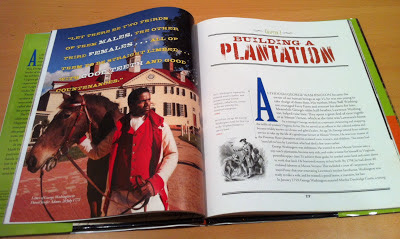 What were the challenges of designing a book illustrated with so many different kinds of images, from archival illustrations to historical documents to reenactment photography? (By the way, the photo above was taken by yours truly and does NOT do justice to the real thing.)

Jim:  I know this kind of thing always causes some trepidation from the editorial side of a project. However, I look at having to rely on a diversity of visual images/styles to flesh out a visual story as an asset. Given the challenges of finding images to represent different points of the story, to me, only makes it visually richer, especially when they are framed with the use of photography of reenactments. When you speak of HISTORY many people aren't going to think of it as very interesting. I want to try to create a visual package that helps make the book engaging on one level so it is appealing for the reader to then get absorbed into the story. It also helps to have a captivating manuscript.

Why thank you, Jim. Is there anything else you'd like to share about designing Master George's People?

Jim: I loved working on this book. It was a true pleasure to be able to try and package it in a way that was respectful of the period and the story, while trying to make it visually appealing to today's readers, and to create a sophisticated book that kids would want to read, as if something really special had been created especially for them. Yes, it is a very serious topic, but that doesn't mean it can't be presented in an attractive and sophisticated way that is clean, fresh, and hopefully not so trendy as to become dated. You want a design that has as long a shelf life as possible.

Many thanks to Jim for giving us a glimpse into his creative process. And my personal thanks to him for helping me tell the story of George Washington and the people he held in bondage.

Posted by Marfe Ferguson Delano at 4:00 AM

Congratulations, Marfe. Five years is a long time, but it looks like the final product was well worth the wait.

I've always been interested in this piece of history too, Marfe. I even took a course called George Washington's Slaves at GMU. Can't wait to see what you found out! Whenever I talk about GW at schools, I say that George and Martha already owned 135 people back when they got married....emphasis on the word "people."

I can't wait to read this book. I assume it will be a very useful book to pair with other books about Washington as we teach children to think about history.