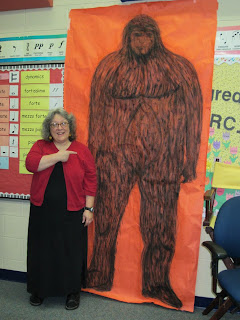 When I do school visits – and I do a lot of them – I tell the kids I get paid for being weird.  At first, they’re eager to agree.  After all, I’m a plump old lady – an intrusive stranger and core reason they’re not at music or P.E.  They don’t know who I am, and they don’t care until I give them a reason.  So I set out to do just that.

Scattered pictures appear behind me on the projector screen – dinosaur skin, raptor claws, a dolphin with albinism, mummified kids, African wild dogs, a junk yard tiger cage, the Loch Ness Monster, Sasquatch, the list goes on and on.  As the pictures click by, I reveal more than the subjects of my books.  I reveal myself – who I am and why I love doing what I do -- how they could do the same.

In no time, they have come to believe my original premise – that I AM weird.  But the shift has begun.  They either swoop in to tell me I’m not weird, I’m just cool.  Or they rush to confess that they are delightfully weird too.  The sting of the word has vanished.  Wonder is unleashed.

That and only that might be explanation enough for why I fly my weird flag with such glee.  But that’s only the frosting on the cake.

I was a reluctant reader as a kid.  I was a good reader, but I didn’t care about books.  I wanted to be outside catching snakes and lizards.  I wanted to be as far from sitting still as the universe would allow.  And even when I did go to the library, Clifford and Dr. Seuss were my only allies.  Beyond the Golden Book of Reptiles and Amphibians, I could not find a nonfiction book that was perfect just for me.

I write weird for the outsider I used to be.  Tapping into that distant memory paves my way to reaching other kids who feel the same way NOW.

“I have to tell you something!”

William didn’t go to lunch the day I visited his school last spring.  He buzzed like a hover craft in the library instead.

“It’s hard to believe,” he inched closer, “but I think it’s true.  I think you may love the gathering facts as much as I do.”
“How much do you love it?”  I asked.  And he knew I didn’t ask the question to be kind.

“Or they don’t understand you,” I said.

“Perhaps.  Perhaps.  But you,” he insisted, “you really do understand.”

I admit to being weird – at school visits, through the topics I tackle because I love weird details.  But I love being weird because it helps give so many quirky kids a place to call home – a place between the pages of my books.

I accepted, long ago, that I would never see my books showered with accolades, even if I research and write them with the same dogged factual determination I recognize in the books by my peers.  But I wouldn’t trade my body of work for any certificate or medal.  My awards are called William or Leo or Cassy.   My affirmations are delivered in the faces of the kids that cling to my books, and I couldn’t love anything more.

Picture a Maine boy eight years old.  It’s -9 degrees outside, but he’s wearing camo print cargo shorts and a Mario Brothers t-shirt.  He’s in line to touch a pair of Bigfoot track casts – the two I held up in front of his class only minutes before.  As he stands, he is also twirling.  His voice is perky and high.

As he nears the target of his interest, the spinning becomes more focused -- one spin, one touch, another spin, another touch.   With each move, with each touch, he trumpets a single word.

Goal!  Off he runs, to destinations I can only imagine.
I am as happy as he is.  We are, both of us, truly happy.  It doesn't get better than that.

And so it continues -- my quest for the weirdly wonderful.  How could it not?  My tribe is oddly waiting.   : )

this is wonderful Kelly!

I think of the many children you have helped to feel comfortable in their own skin. The thousands of children who long to find a way to have their "weirdness" be alright. You have helped them to feel proud and that will change their lives.

My heart swelled and the tears threatened by the time I finished your post. You are truly a gift with a heart of gold.

What a wonderful, wonderful post! Thank you so much for helping kids feel comfortable in their own skin by showing them that you're comfortable in yours--fact-gathering weirdness and all!

Great post, Kelly! And, as someone with a whole book about Poop, I so relate to the weird NF topics that don't win the accolades but that kids love!

What a fabulous post! I appreciate you for sharing yourself with the kids, and your thoughts with us big kids.

Kelly, this post makes me smile from the first line. Smile remembering your visit to WSRA several years ago, smile thinking of the faces of kids with whom I share your books, and smile when other teachers hear about how effective your books are with "outsiders".
And guess what- the "insiders" love your books, too!

A wonderful moment in his and your lives. And an inspiration.

Kelly, what a fabulous weirdo you are! I loved your post.