Exploring The Fantastic Jungles of Henri Rousseau with Michelle Markel 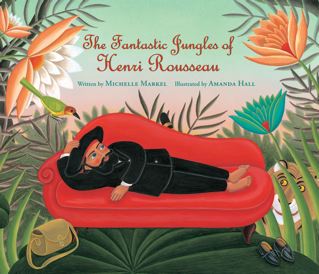 One of the perks of writing for INK is that you get to interview authors about their cool new books. Michelle Markel is on a roll these days with her picture book biographies.  Her latest, The Fantastic Jungles of Henri Rousseau (Eerdman) has got three stars and counting: Publisher’s Weekly, School Library Journal, and Booklist. Here’s what they say:

“The career of artist Henri Rousseau gets a wonderfully child-friendly treatment in a book that captures both his personality and the essence of his pictures. … Markel’s text has a sweetness and simplicity that allows children to understand the story’s underpinnings, giving them someone to root for.” BOOKLIST

Why did you choose Henri Rousseau as your subject?  What’s your connection to his art and/or his story?

I chose Rousseau because of his child friendly jungle paintings and his perseverance in the face of daunting obstacles- especially the mockery of the art critics. They wrote things like “It looks like he closed his eyes and painted with his feet.” I found it incredibly moving that Rousseau could pick up his paintbrush after reading something like that.  Many children get teased about their drawings, so I thought they’d relate, and be touched by Rousseau’s ultimate triumph. Of course his story resonates with grownups too, as some reviewers of the book have pointed out. Who hasn’t felt the sting of rejection? Don’t we all want to be validated?

I also connected to Rousseau because both of us began to pursue our creative impulses later in life. And I have a love of French art and literature. I majored in French in both undergrad and graduate school.

Tell me about your research.

I viewed his paintings (most recently, “Exotic Landscape”) and read a lot of material in the original French- his letters to Apollinaire,  accounts by contemporaries, those nasty reviews. The Getty Research library was a great resource. My past trips to Paris (where I lived for a few months during my Junior Year abroad) helped me visualize the setting.

Why do your choose the picture book genre for your biographies?

I remember it clearly- the day it all began.  I took my young daughters to our local library and found Diego by Jonah Winter, mistakenly shelved with fiction. It read like a magical tale about a little boy with artistic tendencies. I didn’t realize the story was about Diego Rivera until I got to the part about the striking workers. I thought that was brilliant- to bring literary techniques and a sense of wonder to picture book biography. I’ve wanted to do the same, ever since.

What do you think of the illustrations for your book? Did you see sketches?  Did you have any input?

I did see pencil sketches, but my input was unnecessary. Amanda did her own extensive research (which enabled her to draw portraits of Rousseau through the years, as well as likenesses of Picasso and other avant garde acquaintances). She also asked me questions through our editor. When I saw the final pictures, I was thrilled. Her paintings are emotional and luminous. It’s like the text and art are soul mates.

You’ve published with big east coast publishing houses and small regional presses.  How would you compare the experiences?

I can’t emphasize what a pleasure it’s been to work with a small press this time. Eerdmans has a reputation for fine picture book biographies; they knew exactly what to do with this book. It started with choosing the right artist, and continued with the marketing support- making beautiful postcards, a trailer, and being responsive to every email I send them. I haven’t had this experience with other publishing houses.

Henri Rousseau is about 900 words.  We hear these days that fewer words are better for picture books.  What do you think about this? Do you aim for a particular word count?

I think children should be exposed to all kinds of writing, from short and punchy to long and leisurely. Some authors, like the genius William Steig, excel at crafting elegant leisurely passages. Children need to hear the verbal richness of books like Amos and Boris, and Sylvester and the Magic Pebble. Less is not always more.

That said, I try to tell my stories in the fewest words possible, which for me is usually around 900. Once the research is done, there’s always a tension between the desire to include amusing or poignant details, and the demands of uncluttered storytelling. It’s very difficult, but rewarding work.

You’ve also written biographies of artist Marc Chagall and labor organizer Clara Lemlich. How do you choose your subjects?

Certain figures and historical periods capture my imagination. I also look for narratives that would resonate with children. Clara Lemlich was young, small in stature, and was treated unjustly. I think kids can picture themselves in that situation. They have a keen sense of fairness.

There comes a point, while researching a potential subject, when the story just reaches in and grabs my heart. I’m overwhelmed with affection and admiration for this person.  I want to express that as lyrically or joyfully as possible, as a tribute to them, and a means of inspiring young people. That’s the ideal.

Will we see more picture book biographies from you?

I have two more picture book bios in the works, with Chronicle Books. It’s a great time to be writing nonfiction! 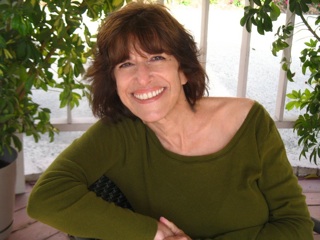 Posted by Gretchen Woelfle at 12:25 AM

I just read this book last week and thought it was wonderful.

Lovely post, thank you for sharing...I know a few children that would love reading and looking at this book. Smiles, Annalisa
http://helpfulannalisa.wordpress.com