Since this is the month of reruns, I thought I’d give you an update on this column that ran in December 2009. We authors are often circumspect about our books before they actually appear, and so I didn’t identify this project by name. But now, since it’s only months away from publication, I proudly introduce….

WRITE ON, MERCY! THE SECRET LIFE OF MERCY OTIS WARREN, written by me, illustrated by Alexandra Wallner, (Calkins Creek: Spring 2012) 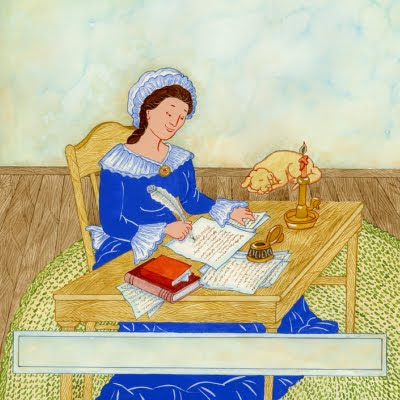 Here is the cover art, in the process of final design. I’ve also added some further details about Mercy in brackets below.

For a forthcoming picture book biography, I did the same amount of reading. I visited my subject’s hometown [Barnstable, MA] and the town where she lived most of her married life [Plymouth.] I ordered microfilms of her papers from her state historical society [Massachusetts] and had them delivered to a nearby public library [Santa Monica, CA,] where I squinted and printed decades of her handwriting. My first draft of the book came in at 7100 words. Draft #2 was 2400 words. Draft #6, the one I sold, had slimmed down to 1232 words. Just like losing those last five pounds, the last draft was hardest to write.

• I figured out what my story was about. [Her audacity to become the first woman to write and publish political poetry, plays, and history.]

• I decided which parts of her life illustrated what I wanted to say about her. [You’ll have to read the book to find out!]

• I ruthlessly expunged all kinds of wonderful details that didn’t enhance that story. [See below.]

• I did all that again and again, in each draft.

The advantages of writing longer is, of course, that I could include more of those wonderful details. I could bring in a larger cast of characters. I could quote the vitriolic tirade between my subject and a longtime friend. [John Adams excoriated Mercy in, count them, TEN letters for not praising him enough in her history of the American Revolution.] I could talk about her brilliant brother and how he went mad. [James Otis, called The Patriot, already mentally unstable, never recovered from a Loyalist beating.] I could discuss and quote more of her writings. I could talk more about her children and their tragedies and her grief. [Three of her five sons died before her, including her favorite, Winslow, killed in an Indian massacre.] I could discuss her friendships with women and what that showed about her era. [Intelligent women who remained offstage while their men played leading roles.]

What did I gain by choosing to write a shorter picture book? I could use a livelier voice and more colloquial language. This works better in a short form than it would in a more detailed and documented treatment of her life. And of course, I’ll have [Alexandra Wallner's delightful] pictures to help me tell the story, describe the setting, and create an atmosphere.

Writing long, writing short – each has its charms and challenges.

I love your explanation of what you cut in the process of finding your story. That is the hardest part for a long-winded person like me. I appreciate knowing someone else writes by whittling.

Peggy Thomas
New for 2011: For the Birds: the story of Roger Tory Peterson (Calkins Creek)

Thanks, Peggy. You're a great whittler! I'm a big fan of your Farmer George Plants A Nation and look forward to For the Birds.