The Dog (and Sunny) Days of Summer

Here's my summer rerun. Although it moves on to more serious literary matters, this post begins with a love song to days long with sunlight. An appropriate post for July as well as its original pub date in March. Have a wonderful summer!

In my somewhat new Monday slot, more of my posts fall on holidays (duh!) and I have just let them pass. Last month, for example, Valentine’s Day came and went, but my heart wasn't in it.

Today, however, I’d like to celebrate this week’s unofficial holiday that, in my opinion, deserves to become official--the onset of Daylight Saving Time (DST). What an emotionally lifting gift—especially to New Englanders who have been battling the suicidal impulses that accompany a 4:30 sunset. For months we have tried to keep our spirits up as the light inched back a minute at a time. Then PRESTO CHANGO! In just one day, arbitrary magic multiplies the jump times 60. We get a whole new hour of light—and life becomes brighter in every way. If only Zoloft worked so well.

As nonfiction writers we are obligated to tell the truth and nothing but the truth, right? What about the whole truth, though? In this case, I would have to admit that DST causes increased danger of traffic and pedestrian accidents during its first week because of sleep cycle disruption. It was never created to help the farmers or reinstated more recently to save energy. In fact, farmers hate it and many experts believe it increases energy costs: electricity for air conditioning and over $100 million a year for the airlines.

Why did this idea gain purchase? Some British golfer in 1907 realized that if one hour of sunlight was switched from the sunrise side to sunset, he’d have time to get to the back nine. In fact, when the 1986 Congress debated the issue of extending it into March, the golf lobby went to town. According to Michael Downing, author of Spring Forward: The Annual Madness of Daylight Saving Time, the golf industry estimated the extension of DST would increase their revenues by 400 million 1986 dollars, the barbecue industry over $100 million. In other words, if you give Americans the chance to go outside at any time, they will spend money.

Telling the whole truth about DST is not a horror. An ironic example of one of America’s worst traits, perhaps, but not a deal-killer. In the unlikely event that I ever wrote a book about DST, I’d “out” its origins with relish.

But what about other times, when telling the whole truth in our books for younger children is a lot more painful? Then how far do we go? I just attended a conference on sustainable energy this week where everyone had already accepted the devastating long range consequences of climate change as inevitable. Nobody was talking about getting better gas mileage or "clean coal." The focus was on how to think about reconfiguring communities in the Brave New World. I'm not considering a book about this subject either; but how do you give kids hope and this kind of information at the same time? 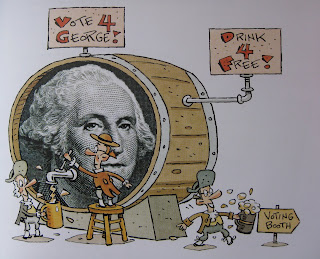 When I wrote See How They Run: Campaign Dreams, Election Schemes, and the Race to the White House, part of my goal was to provide the good, bad and ugly aspects of our electoral process. This included cutting a few Founding Fathers down to size. Washington buying an election for the Virginia State legislature by treating voters to 160 gallons of alcohol? No problem. Letting kids know that Jefferson paid a newspaper editor to write propaganda against Adams--a touch worse.

But when I read an accusation that Lincoln only granted passes to Republican soldiers to leave the battlefields to go home and vote, I felt sick to my stomach. At that moment I understood that the adult me had gotten more sophisticated, even cynical, but my feelings about certain subjects or heros had remained frozen as developed in childhood. I thought about burying that Lincoln fact for a few weeks, then started looking for the evidence. You don’t know what a relief it was to talk to the curator of the Lincoln Library and several scholars, who convinced me it wasn't true. But if they hadn't...????

Anyone out there have examples of times when you agonized over what information you included in a book—or excluded? Do you have second thoughts about how you handled it?

A short self-promotional announcement:
Perhaps some of you remember that I am currently an author-in-residence in an urban school right across the street from construction that’s renovating Old Colony Housing Project in South Boston. Last week and this one are a particularly exciting time on our blog. The kindergarteners have been given the opportunity to name a huge crane (ala Mike Mulligan and Mary Anne) and are learning the democratic process in the bargain. It’s a good time to check it out and subscribe for a week (or more!).
Posted by Susan E. Goodman at 2:33 AM