We all know that an author should never say yes to a school visit without first knowing the terms. But last summer Cynthia Ruptic, the lower school librarian at the Rabat American School [RAS] emailed me. “Come to Rabat for two weeks. We’ll have a great time.”
“Yes! Yes! Yes!”

Usually these international trips last a week, at least that’s what I’ve been told as I had never done one before. But Cynthia and the upper school librarian, Lora Wagner, thought that since
I write for children and young adults, and since I’m a writer and photographer, two weeks would be a better fit. Two weeks in Morocco? How could I resist.
That was last summer. As the time for my visit neared, North Africa exploded in a sea of Facebook revolution. My good friend, Liz Levy, was trapped in Egypt along with Bruce Coville and his wife. Trouble in country after country inched closer to the border of Morocco, and the conflicts grew more violent. Was this the right time to talk about nonfiction and photography. Would the students concentrate on anything other than what was happening on their continent? Was it safe? The school principal, Kathy Morabet, emailed, “Come! Morocco is peaceful.” 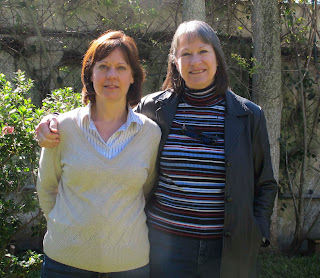 (Lora and Cynthia)
And so ….
My two weeks in Rabat were intense and wonderful. Before I left, though, Cynthia emailed a program that freaked me out by its Cecil B. DeMille, Technicolor-coded complexity. There was a two-page spreadsheet, chock-a-block filled with classes, photography workshops, after-school club meetings, auditorium presentations, and a teacher presentation. Class visits were from Pre K to 10th Grade. I immediately came down with a sore throat that lasted until I arrived.

In addition, Cynthia and Lora set up a series of half hour meetings with each teacher before I was to meet their class. Yikes! When would there be time to do all that? Those meetings turned out to be a godsend. They gave me the sense of what the teachers were doing and how my prepared programs could be adapted to reinforce their teaching. Class projects ranged from growing silk worms in a shoebox to scribes in Ancient Egypt. Science, math, and ancient history are not exactly a clear fit with my work as a contemporary nonfiction author. And yet, when we put our heads together we found ways to bridge the gap.
So when Alice Mendoza’s kindergarten class went to work on the RAS Storypath Park, the students photographed the tops of the school’s palm trees and attached prints to clay models that represented the trunks. 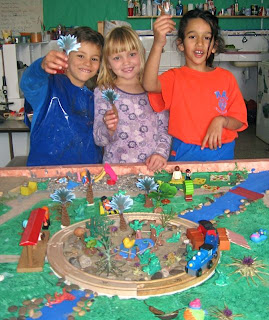 Before Judi Meddoun and Nigel Barker took their third graders to a bridge under construction, we did another photo workshop dealing with lines, curves, colors, and textures. 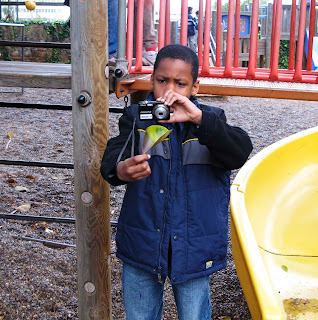 (Photographing texture)
Then there was another session to select photos for an essay to be completed after I was gone. The teachers are currently turning these projects into photo essays with text.
Carlos Lindbloom’s six graders had to choose an ancient Egyptian character, e.g., a scribe, a stonecutter, etc., research it, and be prepared to answer questions in character. Lora filled a large table of books about ancient Egypt. We did a session on the interview techniques and ferretting out primary sources. And our own Deborah Heiligman’s tip to research and then hide your secondary sources, as a way to force you to write in your own words, was a big hit. Thanks for that, Deb.
Much of time in the upper school was devoted to discussions about the process of researching and making books, especially No Choirboy and Iqbal Masih and the Crusaders Against Child Slavery. One class read a fiction version about Iqbal. When they compared them, INKers will be happy to know, they preferred the nonfiction. An upper school advanced art class read parts of No Choirboy and was asked to create a piece of art portraying their opinion, pro or con, about capital punishment. The half-finished works ranged from abstract black-white-silver boxes to intricate ink drawings. One girl was stuck: “What if I have doubt?” “Draw doubt!” The lower school seemed to fall in love with Jamie, an eight-year-old dwarf in Thinking Big, and Nim Chimpsky, The Chimpanzee Who Learned Language. These books were read and discussed in the library while I talked about more current books in the classroom.
The bridge also made my number one priority, “research is fun, the deeper the research, the more fun,” tangible to their own work. My number two priority, that “drafts are a good thing,” remained a somewhat dubious concept, but, hey, you can’t win them all in only two weeks.

Contemporary nonfiction became all too appropriate when the revolution in Libya took a turn for the worse. Nights, we watched French television. Days, some of the high school students marked the events with poems and guitar dirges.

I wasn’t going to take this on, but I feel that I must. Having experienced the incredible warmth of Muslim hospitality, I’m appalled at the way this large, diverse group is portrayed by American media and some fundamentalists. It’s time we stop this nonsense of stereotyping to the lowest common dominator.

While horrendous acts of violence looped across the TV, striking acts of kindness appeared in real time. Two American teachers took my husband and me to a seaside lunch with their Moroccan friends. The restaurant was crowded so we moved a table onto the beach. At one point a little girl approached saying that she was hungry. One of the men at the table brought over another chair, sat her down, peeled the bones from his fish, and fed her. 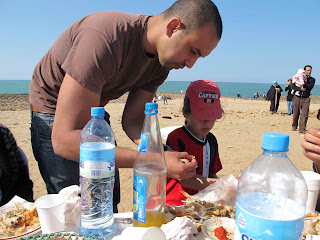 The assistant librarian in the lower school arrived each morning wearing beautiful scarves and jalabas. One day I asked where she bought her lovely jalaba. [Always think shopping] Her mother-in-law made it. On my last day at the school, Stephanie, her husband, and children showed up with a going away gift. I’m wearing Stephanie’s mother-in-law’s jalaba as I write this blog.

There was time for fun, too, such as dinners, parties, and a teacher outing to the Chellah, a fort built in 1339, for a photo shoot at sunset. 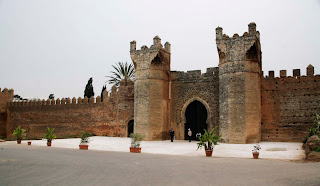 And there was an extraordinary weekend in Fez - with a stop in Meknes and Volubilis - with Kathy and Ahmed Morabet. 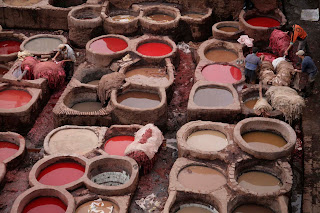 (The Tanneries of Fez)
Back to business:
Lora, the upper school librarian, attended all my upper school classes. She took notes and photos so that she could do follow-ups after I left. The music teacher wrote a song about nonfiction that the children sang in the auditorium. It took my breath away. I felt like a rock star. Now I know why Mick Jagger doesn’t retire.
The last day of classes, I met Cynthia in the library. We were going to a closing program in the auditorium. She had a large box of tissues in hand. “We’re going to need this,” she said. Stephanie pulled out another box. “You had better take two!” She was right. It was hard to say goodbye. 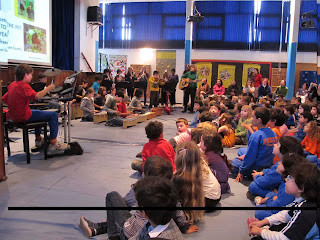 PS: I can't end this blog without mentioning the two families who hosted me: Kathy and Ahmed Morabet; Lora Wagner and Majid El Ghaib, and their daughter, Alia. They made me part of their families and I can't thank them enough.
Posted by Susan Kuklin at 5:00 AM

Susan -- what an incredible, moving, and wonderful experience. And the photos are great. Thanks for sharing this amazing school visit with us. Jim

Thanks so much, Jim

I still don't know how you fit all that into two weeks! It all sounds fabulous for you and the students. Don't you love the international school experience? (I went to West Africa last fall.)

I bet you are getting inundated with requests for your contact information for this school. What a dream school visit! Though you sure did work hard! What lucky kids and teachers they were to have you there, Susan. And what a beautiful example of reaching across boundaries and religious and cultural differences to form life-long bonds.

Thanks Susan...
It was so moving, and I loved hearing about how you worked with the teachers and it brought back such wonderful memories -- the pictures were fantastic.

I agree with Gretchen, it's a wonderful opportunity to be part of the International School community -- in fact our whole children's book community with the teachers and librarians who care about books and their students

Thanks for sharing this with us...
Liz Levy

What a wonderful lesson on how to work with the teachers and the school -- and the photographs were so moving.

It made me feel so grateful that we are part of the community that we share.

Yes Gretchen and Liz, international scool visits are fascinating. I'm hooked. And it wasn't as hard as it sounds. I was busy all day, but it was fun busy. Thanks to you and Deborah for your comments.

Thanks for sharing stories about your trip to Morocco. It must feel so gratifying to know that your work sparks discussion and creativity in people of all ages all over the world.