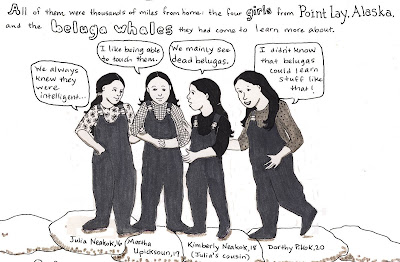 There’s been a lot of discussion about invented aspects of nonfiction lately, although of course it has always been an issue: whether to use only direct quotes in context, and not to envision conversations; whether to connect points A and C with a B that seems necessary but is unknown; whether -- and how -- to fill in the blanks of a narrative.

Although the answers are full of grey area (and controversy) they seem more black and white to me than do answers to similar questions about illustrations. While illustrators must use real, reliable references, they also make tricky decisions about what to show -- and wander the border between fact and fiction struggling to envision a scene that demonstrates the heart of the story being told or the situation being described.

Take my current work, for example. I’m writing this blog post in a break from my forthcoming graphic article, White Whale on the Go, a Humanimal Doodle (For more on these, please see my Humanimal post or the Humanimal section of my website. ) Here’s the story this doodle tells:

The tiny Iñupiat Eskimo village of Point Lay, Alaska depends for its food on beluga and bowhead whales that migrate through. The Iñupiat have dispensation to hunt a small number of whales for subsistence. Scientists trying to learn more about beluga behavior and physiology asked the Iñupiat for access to the whales -- specifically, they asked for help catching whales so they could be tagged with data transmitters that would track their paths, and for tissue and blood samples from recently killed whales. These samples were used to compare the wild beluga with belugas kept at Mystic Aquarium in Connecticut.

After several years of cooperative work, two Point Lay men were invited to visit Mystic to see the labs where the research was conducted and to visit the aquarium’s whales. Enthralled, they asked that other people from Point Lay be invited, and they were quite specific about whom: high schoolers. Not only did the men want the cooperative effort to continue -- because scientists are monitoring the effects on whales of climate change, expanded shipping lanes, and increased drilling for oil -- but they wanted the next generation to lock things in. Moreover, they hoped their young people might be inspired to go into science.

This year, four Point Lay girls visited Mystic, and I drove up to meet them and to talk to the scientists they were working with. I came home with good notes and great quotes, and now I had to turn them into a visual story. My Humanimal Doodles are all, uh, doodled, so photographs were out of the question. But I did have photographs showing the girls meeting Mystic’s three beluga whales, wearing chest-high waders to enter the chilly pool.

Well, what do you think I should have done? Copy a photograph as a drawing? If I did, I worried what the photographer might think. What about attaching a quote to a drawing copied from a photograph? That seemed wrong, too, because the things the girls told me weren’t associated with particular moments that might have been photographed.

What I came up with, instead, was an imaginary situation completely based in truth. Here it is: the four girls in their waders, which definitely happened; standing together and acting goofy the way people do when they put on waders, because they feel a little silly, their feet all heavy and weird; and saying things to each other that they had actually only said to me. In identifying them with their actual names and ages, I feel as though I’m saying “This is true and factual.” Overall, it isn’t exactly correct historically, if you will, but each piece is factual. In the end, I made a judgment call that the girls would not object to the context in which I placed them and their comments.

I am reminded of a favorite quotation: “Things are not untrue just because they never happened.” -- Dennis Hanley

In my Humanimal Doodles, I find myself continually confronted with these kinds of situations and decisions, and frequently check things out with the subjects of the articles. I’m lucky to be able to do this, since they’re around, and I can call them up or email them my work. And their affirmative responses to their portrayals gives me confidence that if what I am doing “works” for them in telling their stories, then it works for me in writing them up.

I love the thoughtfulness of your post, Karen. You encourage me to see grey areas where I thought I saw black and white. There is such overlap between fiction and non-fiction--a larger grey area than we think until we consider the implications, as you have. But, of course, narrative in non-fiction has a purpose, a bias, and a story, no matter how many facts are presented. Thanks for sharing your choices and process!