Novelist Carolyn Marsden and I just returned from three weeks in West Africa, where we gave author talks at three schools. I love doing school visits anytime, anyplace, but these were especially memorable. A brief report of our adventures forthwith. 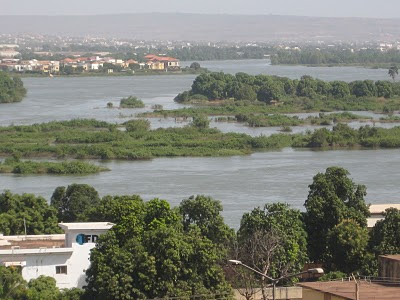 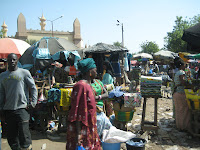 Students at the American School in Bamako were breathtakingly cosmopolitan, as were the teachers. Kids were enthusiastic and articulate - even the middle and high schoolers, who are often hard to reach. We had lunch, dinner, and city tours with many teachers and parents (US and European diplomats, and NGO officials engaged in all sorts of projects: orphanages, teaching, health care, nutrition, centers for homeless kids, etc.) -- all with great stories to tell. Bamako is a sprawling city on the Niger River - mostly unpaved streets with many goats wandering about. But the people are resourceful, and the kids are doing their kid stuff. 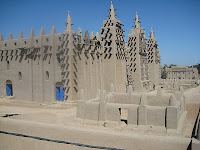 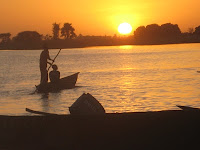 We traveled to Djenne, a UNESCO World Heritage Site - huge mud mosque and traditional mud homes. Lovely sunset boat ride (with peanuts and three cups of green tea - one bitter like death, one sweet like life, and one very sweet like love.) The boats (pirogues) are similar to those in ancient Egyptian paintings!

FULANI CATTLE CROSSING - MOST AMAZING EVENT OF ALL! 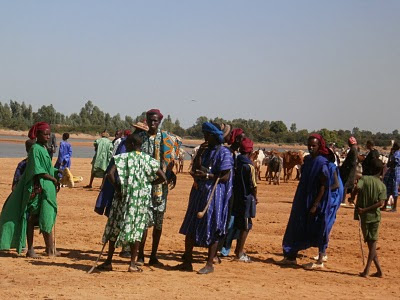 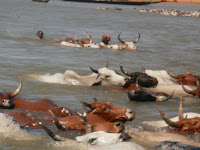 Drove for hours on a bumpy sandy track to a narrow spot on the Niger where Fulani herders gathered, dressed in their finest robes - and gorgeous they were. First small herds of cattle waded to a sandbar, then plunged into the river and swam to the distant shore. Boys swam with them to keep them on course (the current was fairly swift,) with pirogues alongside. Herd after herd swam across for several hours. On the other side, the cattle scrambled up a cliff to a huge grassy plain where they will roam for a few months, then swim back across the river. 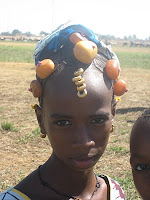 Up on the cliff, women and children waited, sporting much gold and amber. I got a taste of the joie de vivre that African Americans bring to our culture. If we were just a nation of white people, life would be a lot less interesting. 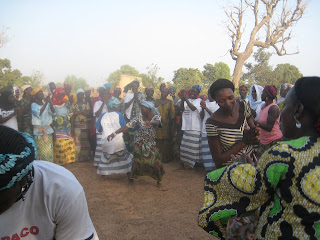 We had less time to spend in Ouagadougou, Burkina Faso, but equally warm hospitality, fascinating life stories, and dynamic students. A visit to the school’s “sister village” gave us a close-up view of a women’s welcoming dance, with butt-bashing, drumming, and singing. 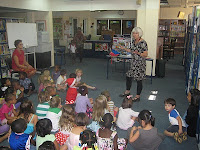 The International School of Dakar is a dream – ocean views, spacious green campus, and the same sort of cosmopolitan (and hospitable) students and faculty. 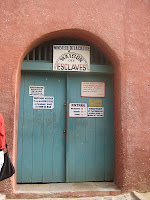 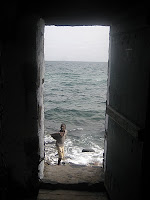 A day trip to nearby Gorée Island gave us a south-of-France feeling with pastel houses, narrow lanes, lush bougainvillea. Also tacky tourist stalls and a “house of slaves” with a tourist talk that was not very accurate. (The historian in me cringed.) 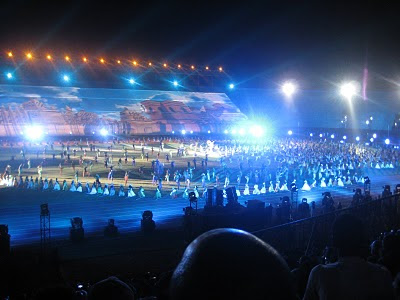 The opening of Le Festival des Arts Nègres at the national sports stadium. One whole side covered in white served as a video projection screen. The program began with a single kora (African harp) player staying alone in the middle of the pitch. Then, about five hundred dancers streamed onto the field to dance a “story of Africa” with video, music, and fireworks. They swooped together into a vast shape, then broke apart to form other shapes, with three symbolic figures (not sure who) wandering here and there on stilts, and drums beating up a storm. After that….. yawn…..beaucoup de speeches by politicians… followed by ten amazing musical acts, and then the grand finale – two hundred drummers thundering to the skies, with fireworks lighting up the self-same skies. I felt the heart of Africa beating. 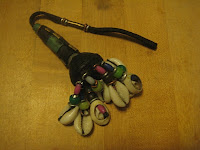 Many asked me – what will you write about it all? I took dozenss of pictures and video at the cattle crossing, and bought a Fulani artifact – a small leather case that holds the kohl they paint around their eyes to protect them from the desert sun. I’ve got the setting and a character – all I need is a plot. Perhaps painting my eyes with kohl will inspire.

Wow, Gretchen, what an amazing trip and experience, and your word tour and photos are spectacular.

Thanks for giving us a glimpse into your adventure, Gretchen.

Gretchen, what a marvelous & vivid experience, you adventuress!