By way of introducing myself to I.N.K., let me say that nonfiction for kids saved me. I’ll explain.

About ten years ago I became obsessed with Benedict Arnold. At the time I was a history textbook writer, and I kept trying sneak Arnold into the textbooks, and the editors kept taking him out. “Benedict Arnold makes me nervous,” an editor told me. Textbooks like their heroes in two dimensions, and their villains too. Arnold doesn’t fit in.

But the obsession persisted. I read every Arnold book out there, and spent weekends at historical sites and Revolution reenactments, taking photos, making sk 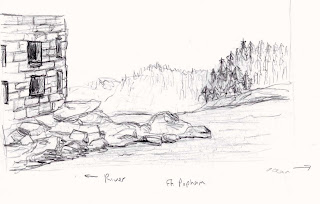 etches, all the while telling myself, “I’ve got to do something great with this material!” I think the pressure got to me. Unable to get started with the actual writing, I filled notebook after notebook with ideas and bits, and as the years went by the project got stranger and more pretentious. Next thing you know I was outlining an epic novel in which Arnold’s life is presented in parallel with that of Lancelot. I got as far as the opening line:

“Lancelot, the famous Arthurian knight, grew up beneath the waters of an enchanted lake. Benedict Arnold grew up in Connecticut.”

Then it was back to taking notes, making endless outlines. I eventually quit writing textbooks and started writing history books kids might actually want to read, and had some success with them. But I remained obsessed with my Arnold project, and even decided, as a gesture of dedication to my art, that I’d better become a hermit, possibly in the Catskills. When I met a wonderful woman named Rachel, I spent much of our first date explaining my Arnold-Lancelot theory; in brief, that Arnold, if he had lived in Arthurian times, would have been a top-ranked knight, but that if he lived today, where we don’t really celebrate jousting that much, he’d probably be a football coach. And I said this in hushed tones, not out of embarrassment, but because I was afraid the guy at the next table might steal the idea.

Amazingly, Rachel and I got married, and I never moved to a mountain shack. Yet still I wrestled with Arnold, with my vow to “do something” with his story. And then, one day, while discussion possible projects with my editor at Roaring Brook, she said, “Didn’t you want to write something about Benedict Arnold?” I said the thought had crossed my mind. So she suggested I write a biography aimed at teens. And that saved me. 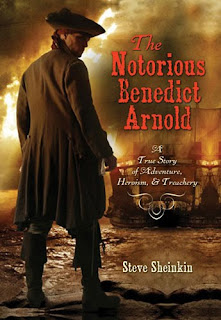 y home that afternoon, I thought about what makes good nonfiction for kids. Obviously, it has nothing to do with the tortured and gimmicky nonsense in my notebooks. What kid would stand for that? To grab and hold a kid’s attention, I told myself, I better just tell Arnold’s story, just show the furious flight and spectacular crash of America’s original loose-cannon action hero.

From that point on, the work was actually fun. I structured the story as if preparing a screenplay, dividing the rich material into short scenes, each with its own bit of action, each leading into the next. I dug into the primary sources, pulling out quotes to add dialogue to the scenes. Then, when it came time to write actual sentences, I just tried to step aside and let the story speed toward its natural climax. There was lots of very helpful back and forth with the editor, of course, and finally, just a few weeks ago, The Notorious Benedict Arnold was published.

Now, free from my Arnold obsession, I’m deep into my next non-fiction for kids, a global thriller about the race to make—and steal—the world’s first atomic bomb. It’s going well, but I have to constantly remind myself of the Arnold lessons: research like crazy, structure the stuff into a clear, tight, fast-paced story, give it a shove downhill—and get out of the way.

Posted by Steve Sheinkin at 9:20 AM

Welcome to the blog, Steve. I'm a fan. I've enjoyed your other books and can't wait to read this one.

This book sounds fabulous, kudos to you!

Having a bit of a Benedict Arnold obsession myself, I'm with Susan in saying that I can't wait to read your book. Welcome to INK and I hope you have a very happy and rewarding 2011.

Thanks for the welcome. I've been inspired by many of the writers on this blog, so it's great to be here!