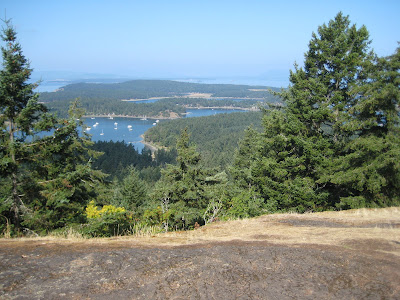 Last month I took a five-day trip to San Juan Island in Washington State. It was meant to be a vacation of cycling, hiking, and kayaking. No writing, no research, no interviews. Just a vacation. And it was – until the second day. That morning we cycled to San Juan Island Historical Park and I learned about the Pig War of 1859 that led to a twelve-year joint occupation on opposite ends of the island by British and American troops. In the end, the only casualty was a pig. But it became an International Incident that was eventually settled by the Emperor of Germany, Kaiser Wilhelm I.

And so my vacation turned into a research trip. I still went hiking and cycling and kayaking, but I also bought books at the park’s visitor centers, explored the two military camps, photographed plaques along the trails, questioned the park rangers, and began to plot a story. This is not the first time a story has leaped out at me from the bushes. And, if truth be told, I really do prefer a vacation with a focus.

Memo #1 to self: Never throw away potentially tax-deductible boarding passes and travel receipts.

Memo #2 to self: Kayak rental is tax-deductible, for how else could I experience the tricky winds and currents that drowned several English soldiers?

An old adage tells us to write about what we know. I disagree. I choose to write about what I don’t know, but want to learn. Full disclosure: I – and other writers I could name, but won’t – enjoy research at least as much, and sometimes more than, writing. Especially when it means traveling to beauty spots like the Pacific Northwest.

Is that why I lean towards writing nonfiction? Perhaps.
Posted by Gretchen Woelfle at 2:00 AM

Beautiful photo on a perfect day. Yeah, I agree. The heck with writing about what you know, write about what really interests you--something new and exciting. That's the essence of nonfiction. All the more power to you if you end up with a tax deduction.

I lived on San Juan Island way back in the 1960s while doing Ph.D. research--a great place to spend some time. I laughed at your idea that you could take a vacation without doing any "work"--not possible for our kind! An intriguing topic always surfaces, sometimes one you don't even know is for a book until some years later!

The Pig War is a great title.