I'm on vacation! Here's a summer repeat of a post from back in April.


In his post entitled, History: What's the Point? Don Brown points out that many kids are bored when they study history in school because, basically, the presentation stinks. The world of children's nonfiction still has a long way to go in figuring out how to write and present information in a way that truly appeals to kids. 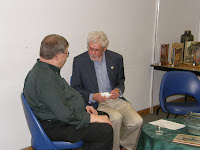 Posted by Linda Salzman at 6:57 AM