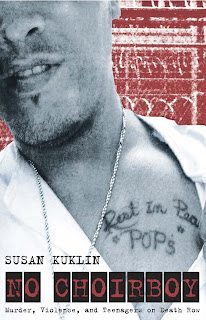 As young writers we are taught “write what you know.” But when I became a writer, I found myself much more interested in what I didn’t know. I can think of nothing more exhilarating then tackling a subject that is as far from my life as possible, and then, go on a spectacular treasure hunt for facts and ideas.

I write a lot about dark subjects for young adults. Many nonfiction writers are drawn to tough themes as a way to go beyond the sound bites, the headlines, and the slogans that make up much of our lives. “An eye for an eye....” “Do the crime, do the time.” “Just say ‘no””. Life is more complicated than what these and other sayings imply.

There are a range of ways a writer can go beyond slogans. What works for me is writing books based on interviews. I find it fascinating to interview an individual and then write personal accounts from my subject’s point of view. From these accounts, along with additional background material, I try to shape a coherent story. The final narratives are usually reviewed by my subjects to be certain there are no mistakes. I’ve been doing this for years and no one has ever asked me to change an idea or statement so that he will look good. This method can be used with just about any nonfiction, including biography, current events, and even history.

Interviews work particularly well when facing dark subjects, such as boy soldiers, Nazi youths, or teenagers on death row. Nevertheless, dark subjects can be difficult on many levels.
It can be difficult for the people interviewed in the book. They reveal their lives and bare their souls. Ishmael Beah’s intimate memoir, A Long Way Gone: Memoirs of a Boy Soldier, is a comparable case in point. Ishmael’s personal experience during a very brutal time in his country’s history is a clear example of how events affect an individual’s life. He is able to describe the brutal war in Sierra Leone in a way that statistics, and even photographs of thousands of nameless dead, do not.

It can be difficult for the writer who has to maintain objectivity. Susan Campbell Bartoletti has talked about making tough decisions while writing her fascinating book, Hitler Youth: Growing Up in Hitler's Shadow. Susan interviewed people who had participated in the Hitler youth program before and during WW II. They described the idolization, the camaraderie, and the conformity that helped Hitler come to power. Very few analyses beat the power of those testimonies.

It can be difficult for teachers and librarians who have to deal with the politics of a controversial book. They are on the front lines. They must balance a heavy work load, the possible wrath of their community, and the possible loss for simply standing up for the First Amendment. By the way, we authors do what we can to support them.

It can be difficult for the reader who may have never before had to confront the world that they find in a particular book. A few days ago my book, No Choirboy: Murder, Violence, and Teenagers on Death Row, was published. Readers, especially those who have not been exposed to maximum security prisons and Texas’s death row, have already told me about strong, emotional reactions that they’ve experienced while reading the book. Perhaps this is because the stories, written in their voices, are very personal, raw, and current. It’s not history. It’s happening right now. How about this slogan: “If you’re not part of the solution, you’re part of the problem.” Now, that’s a saying I can get my teeth into. But it’s still a slogan.

If dark subjects are so difficult for everyone concerned, why are some us drawn to them? Why do we write about civil rights, human rights, famine, strikes, black lists, torture, and death?
There was something about teenagers on death row that called to me. It demanded to be heard. I absolutely had to write this book.Why? I haven’t a clue.

Does anyone out there in cyberspace have the answers?
Susan Kuklin
Posted by Susan Kuklin at 8:29 AM

Great blog, Susan! I applaud your interest in dark subjects. I wonder what kind of people read such books? Perhaps some librarians have the answers.