One of the big advantages of using nonfiction trade books in the classroom is the variety of approaches we authors use for our topics.  We don't just write the usual straight and often boring chronology of events the way a textbook does.  We choose a fresh angle on a familiar topic, which allows us to integrate the basic information into a new framework that can inspire a child's curiosity or lead her into an important fundamental topic through a different door, one that she wants to open because of her own interests.

Vicki Cobb's book, "Science Experiments You Can Eat," teaches children fundamental principles of physical science through something everyone is interested in, their food.  This book has been so popular that it has remained in print since its first publication in 1972.  Readers discover that science doesn't need to be serious or daunting--it can be lots of fun, and the book encourages them to pursue the subject matter even further.  Vicki is hoping to expand and revise the book within the next year.  With this book, readers can have lots of fun as they learn about important principles that they won't easily forget. 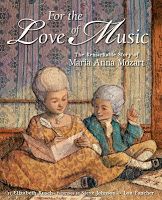 Elizabeth Rusch's book, "For the Love of Music," informs children about life in Europe during the last half of the 18th century and about classical music through the story of Mozart's older sister, Maria Anna, who was also a child prodigy.  She had to live in Wolfgang's shadow once she was of marriageable age.  She did her best to stay in touch with music even after marrying and taking care of stepchildren as well as her own children.  Girls today who struggle with traditional family expectations will identify with Maria Anna and enjoy reading about her life and times. learning about music in the process. 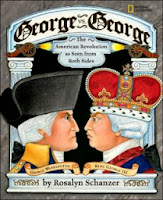 Rosalyn Schanzer's wonderful book, "George vs.George," presents the historical facts behind the American Revolution through the personalities of George Washington and King George III, which gives readers the historical context of this pivotal event in our history.  They learn the British point of view as well as the American one, which helps anchor the revolution in its times and deepens understanding of what life was life back then. 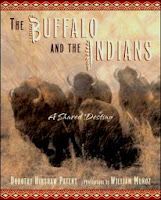 Because I'm a zoologist by training and interest, my history-related books often present a topic through an animal-related theme.  For example, my two books exploring western Native American Indian culture and how it intertwined with the Westward Expansion Movement both use iconic animals for their focus--"The Buffalo and the Indians: A Shared Destiny" and "The Horse and the Plains Indians: A Powerful Partnership."  The curiosity of a reader interested in wildlife could be stimulated by the buffalo book while a horse lover would pick up the horse book instead.  Both would learn a great deal about Native Americans and the Westward Expansion Movement as they learned more about the animals they love.

These are just a few examples of nonfiction trade books teachers can pull off the shelves of their school libraries to engage their students with learning by way of books that take a fresh look at subjects that can seem boring when approached by way of textbooks' dry and uninspiring approaches.

Posted by Dorothy Patent at 1:00 AM