New information can be tough to swallow at times. I wrote previously on I.N.K. about my picture book based on the USDA Food Guide Pyramid that had to be updated due to a change in the graphic (see middle image, below). It happened again in 2011 when the MyPlate program was introduced. Actually, I prefer the plate graphic to the pyramids, which were visually awkward to work with.

My ever-alert editor at Holiday House, Mary Cash, sent me an email the day the news appeared in the New York Times. It was a surprise, but there's no sense crying over spilled milk, right? Obviously my 1994/2007 book The Edible Pyramid, which was set inside a pyramid-shaped restaurant, was instantly defunct. Or was it? More about that in a second.

A new approach was needed, so I began to noodle on it. For some reason, the idea of having big images of various foods with a small main character popped into mind. Have bugs as characters? Hmmm...obvious downsides to that. How about if the food is accidentally put into a machine that enlarges it...sounds implausible at best, or just plain dumb. Oh! I know who it's gonna be: that classic character Jack, who climbs up the beanstalk! So I wrote the story, yada yada, made a dummy, yada yada, digitally painted the illustrations, and yada yada, here it is: 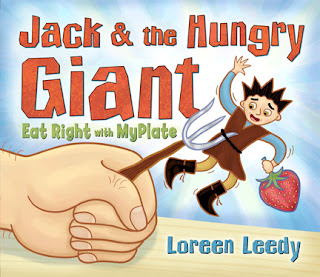 Or will be, soon. It's technically a Fall title, but books have a way of getting around before their official birthday, you know? The story starts out like the traditional fairy tale, but instead of eating Jack, the giant cooks him a healthy meal. The giant, Waldorf, is definitely a good egg.

The book is designed to be a fun introduction to MyPlate and hopefully to a lifetime to healthy eating for kids. The goal for the illustrations was to show an abundance of fresh, appetizing foods, the best starting point for good meals. No processed factory foods here, except at the end under the Empty Calories section.

What about the leftovers, the existing copies of The Edible Pyramid? I was surprised to find out that some educators are still using the pyramid system, because the main difference is the presentation rather than the content. It can take awhile for some organizations to make the transition, apparently. So it's still selling, if not like hotcakes.

In any case, I'm looking forward to cooking up some activities to go with the book. Okay, I'll stop with the food and eating sayings now. Stick a fork in me, I'm done!
Posted by Unknown at 3:00 AM

I'm still stuck on the four food groups, and can remember the Kellogg's breakfast program at schools that encouraged us to have cereal AND toast. Always something new!

Ah yes, the four food groups...I remember them well. I think the current program is pretty good though I don't agree with everything, naturally. For example, I think butter is a perfectly good food to eat as opposed to being put in the same category as sugar, which is so detrimental IMHO. But hey, we do the best we can!