I have asked author and journalist Andrea Warren to write in my place this month. Andrea has written seven esteemed books about young people who have experienced extreme personal challenges as a result of extreme historical circumstances that changed their lives. Andrea is a member of iNK's Authors On Call videoconferencing group, and she writes about her videoconference experience with a school in New York City.

What's it like to serve as an author-consultant in the schools? I’ve just completed my first experience, and I loved every minute of it.

As one of the iNK “Authors on Call,” I worked with fifth grade faculty and students at PS 49 in Queens, New York, on a two-week study of the orphan trains. For those who don’t know, the placing out program that came to be known as the orphan trains was the brainchild of Charles Loring Brace and New York City’s Children’s Aid Society. CAS started a number of fine programs to assist poor children. Brace believed that every child needed a family. He did not like institutional care and was especially concerned about street children, many of whom were the sons and daughters of down-on-their-luck immigrants. He theorized that if he could get homeless youngsters to good-hearted farm couples who could afford to feed an additional child and could also benefit from another pair of hands to help with all the work, that they would step up to either foster or adopt one of the train children. A few experiments lent support to his notion, and thus started a movement that over a 75-year period sent nearly 250,000 children west via trains to new homes.

The 5th grade teaching team at PS 49 had each student read my book Orphan Train Rider: One Boy’s True Story. I suggested supplemental materials, including my young readers nonfiction book, We Rode the Orphan Trains.

We agreed that I would do four Skype sessions. The first was with the teaching team to discuss planning for the unit. They wanted students to understand the history, economics, and culture of the 1850s when the orphan trains began. I made some suggestions and then pulled together some research to assist them. When we had our second Skype session, they were further down the road with their preparation. They had used many of my suggestions and we had a lively discussion.

Then I had a Skype session with the students and talked with them about a variety of subjects related to the orphan trains. The students were well prepared with questions. Many of them come from immigrant families. We talked about the value of them interviewing family members whose stories they did not know. I gave them examples of how they could start their interviews and the importance of taping these to preserve their relative’s voice. The students were lively and engaged during our session. The teachers reported that they bubbled over with enthusiasm about doing interviews and were also excited that they’d met a “real” author.

Instead of a second Skype session with students, the teachers chose to have a third Skype session with me so they could review how the unit had gone. They shared essays the students had written and they reported that many students had gone above and beyond in their research and in buying books for themselves to expand their learning. Among their in-class writing assignments was one in which each student imagined being the eldest child in a large family who was told to go fend for himself or herself on the streets because the family had too many mouths to feed. This assignment helped students imagine how lost and helpless some of the children were who boarded orphan trains. The teachers had some additional questions about how students could interview relatives and asked how students could proceed if their relative was resistant. Again I offered suggestions.

Altogether I invested between 20-25 hours in my initial preparation, additional research to assist the teachers, participation in four Skype sessions, and all the e-mails and other communication that took place. After our final session, Paul Longo, who coordinated my work with the school, said that the unit was a professional high point for several of the teachers. He wrote, “I think this experience has confirmed some of their best instincts as teachers and that has been made possible by you and the good work you have done in your writing and sharing. The whole experience has been extremely positive for all of us on our end of the exchange.”

On my end, too! Should I have other opportunities to serve as a consultant, I will certainly do so. It’s one more way we authors can bring our work to educators and students, and assist in exploring and fulfilling the goals of the CCSS. And it’s a great way to connect with students in the classroom—which in my book is always a joy. 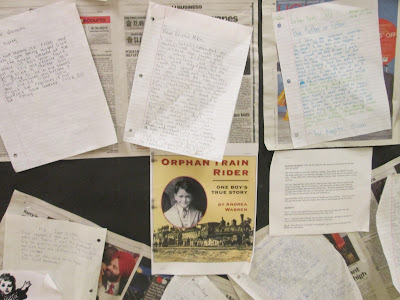 Email ThisBlogThis!Share to TwitterShare to FacebookShare to Pinterest
Labels: Authors on Call

I am so glad to have been part of this experience! We hope that we can continue doing this in the future!