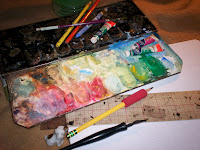 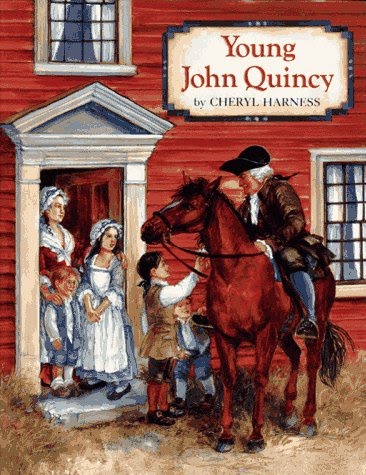 My fellow INK-ers have been writing some well-considered, provocative, and inspiring posts about the travails of writing and keeping the inner fires stoked. Blowing on the coals. I'm reminded that it surely is and has been a whole lot easier to get down to work when the work to be done involves the illustrations. Mainly because, for me, one needn't have silence when one is drawing. When writing, let all be still, which requires the will to turn off the radio, the discipline to do that every day until the manuscript is done. Only then can I be considering the knowledge gained from research, distilling it down, and combining it with my imagination. So I can let my informed daydreams speak and report on what they say. A romantic notion, but there you are. You have to ponder: What did they know? What was it like for the Adamses of Braintree, for instance?
Sure, the text comes first, book-wise. As it says in the Bible, 'in the beginning was the Word,' NOT the pictures, but of course I'm ever mindful of the images as I've written my manuscripts. I'm figuring out what elements of the story they will show and tell. So, by the way, it came as a shock when recently I was told, having sold a manuscript, that some art director preferred anyone's illustrations but mine. But that's another story, one that a discreet person would not disclose, in the spirit of not letting others see one pout.
Kids often ask me, 'which do you like better, writing or illustrating?' I'll tell them that writing is harder, requiring, as Mr. Murphy and Ms. Stone and the other INK-ers have pointed out, constant recharging, offering up your daily silence, flowers, and boxes of chocolates to the Muse. You have to be quiet and think, but it's ever so satisfying - shoot, it's a thrill! – when that discipline is repaid in those moments in which you find yourself having typed out words that sing, that are smarter than you know yourself to be. Thanks, Gracious Muse.
Then the pictures. I tell those little squirts, bless 'em, illustrating's easier for me because I've had so much more practice, but that's not the whole story. As it is in the writing, I have to be still when I'm composing the rough drawings. It involves a lot of staring at a blank pad of tracing paper on which I've ruled out the borders. I'm surrounded with library books, propped, kept open with bulldog clamps. Photographs of the Adamses' homestead, of their old portraits, of 18th century costume, reenactors walking about at Historic Williamsburg. You do a great deal of scribbling, tracing over and refining those scribbles. Ah, but then comes the painting. It's rather like driving across town and having arrived at your destination, you don't remember the mechanics of driving, those thousands of decisions made with a different part of your brain.
Painting a picture makes for a long day, a week's worth of long days for just one spread. Charging up for that requires only this: Fix a cuppa coffee. Fill the water jar. Open up the battered paintbox I bought for Mr. Ellis's watercolor class in the summer of 1971. Pop a cassette or CD of whatever recorded book I'm listening to and go into a dream. Paintbrush in the water, in the scumble of paint, into the penciled outline on the pristine, bleached cardboard. First a wash of color then another darker bit where the imagined sunlight does not fall. And pretty soon there are people there, at least their images, of what storied John and Abigail, their four children, their uncomfortable, smelly, candlelit world might have been like.
At the end of the day, often well past midnight, my hand hurts, that upon which I've sat hurts as well, and I look pretty dreadful, but the blank rectangle of illustration board is filling with color. I can't wait to get back to it next morning. It's as if the lights go down in the theater and the imagined world comes alive.
Gosh, I've loved it.
Posted by Cheryl Harness at 8:00 AM

Email ThisBlogThis!Share to TwitterShare to FacebookShare to Pinterest
Labels: Cheryl Harness, US History

Thank you for your clear consise distillation of the work one does to create an illustrated non-fiction book.

As for that insensitive critic is who'd "prefer" another's illustrations. Clueless.
They should do their own book. Not likely....too much work!
Fortunately, it was your story.