Numbers In the News 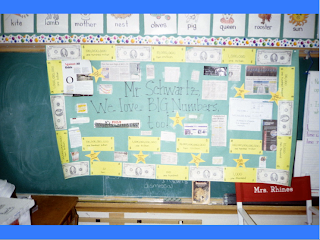 A few years ago I was greeted at a school by more than the usual “Welcome” banner. A bulletin board shouted, “Mr. Schwartz, We love BIG numbers, too!” Some of the numbers in articles from newspapers, magazines and websites had been highlighted, and children had written about the significance of the numbers in the context of the news items.

I appreciate it when a teacher guides students to the confluence of math and social studies where numbers and current events meet — which they do every day. Numbers are always in the news.

I recently explored some of the many youtube videos and web pages devoted to “explaining” big numbers, especially when they have $ signs in front of them, and I found that most have a covert (or overt) right wing anti-tax message. Someone should catalog the comparatively few whose political undercurrents run the opposite way (illustrating $s for the military budget in comparison with, say, education or hunger programs). This could be the subject of a future post, but right now I am going to examine three newsworthy numbers that have invited my musings.

"The 99%" Three months ago, no one would have understood the numerical reference but now it needs no introduction. On October 10 in the Economix column of the New York Times, Catherine Rampell provided some statistical analysis. Here’s a sampling:

If your household were right at the cutoff for the 99th percentile in income, your family’s annual income would be $506,533. You and your fellow Americans of equal or greater income in the top 1% would, in fact, be earning 20%, or one-fifth, of all American income. But what you earn alone is not what determines your wealth. Your wealth is what you’ve accumulated. The top 1% holds about one-third of America’s riches — an average of just over $19 million. Nice going! Tough luck for the rest of us.

To me the most interesting thing about wealth distribution is how unequally divided it is even within that top 1%. The mathematically minded might say that the income curve rises steeply above the 99% level. So, while you (at the 99th percentile, remember?) are earning a mere $506,533, your neighbor (in the mansion down the street) is at the 99.9th percentile. He or she is earning $2,075,574. You’re both in the top one-hundredth of all earners but your neighbor is also in the top one-thousandth. Nobel-winning economist Paul Krugman calls this group the “super elite,” a term we should throw in the face of Republicans who use the word “elite” to besmirch the character of anyone with a Master’s degree or a taste for latte. These “elite”-bashers who control of our political agenda have devoted themselves to cutting the taxes of the super elites with the same blade that, on the back stroke, is meant to slash Social Security, Medicare and Medicaid. Hence, Krugman advises the Occupy movement to expand (by an important 0.9%) the scope of its rallying cry to “We are the 99.9%!”

7,000,000,000 (aka 7 Billion) I’m looking at a scan I made of a newspaper article from October about the earth’s population reaching a milestone population — a billion multiple. But it’s not seven billion. It’s just six billion. I scanned it in October, 1999. At that time, the 6 billionth human was getting ready to be born. Last month — October, 2011 — the media were again abuzz about the earth’s population reaching a billion multiple: 7 billion. That means our planet added one billion people in a mere dozen years. Demographers have been stunned. But our growth rate is slowing. By 2050, we’re predicted to add only another 2.3 billion — an amount that nearly matches the number of people who inhabited the planet in 1950.

Explainers from Ann Landers to President Reagan to David Schwartz have tried to put big numbers into micro-narratives for public consumption. “If you wanted to count from one to one billion,” I wrote in my first book, How Much Is a Million?, “it would take you about 95 years.” Hence, it would take almost 700 years to count every person on earth today. Of course you’d never be able to keep up with the population as it grows.

As with so many genres of digestible information, the current catchphrase is “There’s an app for that.” Apps are the snack food of the information age, and the current population of the earth is no exception. This app, from National Geographic, is called “7 Billion.” Free from the Apple App Store, it’s full of photos, videos, charts and infographics. Here are a few gleaned factoids:

— Every second five people are born and two die. (Can you see the problem?)

— There’s plenty of space for 7 billion people on earth. We could all fit shoulder to shoulder in Los Angeles. (If you thought rush hour on the Harbor Freeway could get no worse, think again!)

The app also says it would take you 200 years to count to 7 billion. I disagree. That would be possible only if you averaged about one number per second. Try saying a few of the big ones and you’ll see it’s impossible to whiz through them that fast.

17.2 million You may have missed this stat, which I share in the wake of Thanksgiving weekend. It’s the number of households in the US who are “food insecure,” the euphemism du jour for “hungry.” Representing 14.5% of households (one in seven), it’s the lowest level of food security in our nation’s history and it encompasses 48.8 million people.

The following figures are reported by Pat Garofalo, Economic Policy Editor for ThinkProgress.org. Food insecurity has grown by 30% during the Great Recession. Almost 4 million of food insecure households have children. Fifty-five percent of the households participate in one or more of the three largest Federal food and nutrition programs — SNAP (formerly Food Stamps), WIC and the School Lunch Program — yet 10.5 million eligible children do not participate. Last year, nearly half of the households seeking emergency food assistance reported that they had to choose between paying for heating fuel or food.

These are not cheerful statistics to contemplate as we conclude the Thanksgiving weekend, but ignoring them would be about as appropriate as further tax cuts for billionaires.

the BBC website can show you your number in the 7 billion people on earth: http://www.bbc.co.uk/news/world-15391515#output_1

Thank you, David, for showing the relevancy of numbers and crunching them so well. This is the kind of piece that people pay the pundits a LOT of $$ for. Maybe we should send it to them.