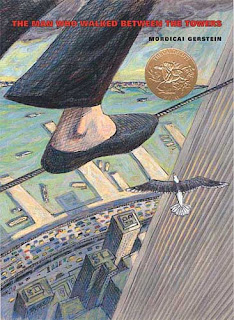 I can’t remember how long after 9/11 I started hearing about the publication of children’s books inspired by the event. I do, however, remember my reaction. Of course, kids’ thoughts and feelings had to be addressed. But I could not help thinking of the books about Princess Di or Jonestown that sprung up like mushrooms after a wet spell. Whether my own feelings were caused by grief, cynicism, decorum or all of these, I do not know. But I didn’t read these books when they came out.

Eventually I did read The Man Who Walked Between the Towers by Mordicai Gerstein. I can’t imagine a better response to that day. Gerstein deservedly won the Caldecott for his ink and oil paintings that captured Philippe Petit’s wonderful escapade, stringing a tightrope across the towers to walk and dance in the sky. They are stunning, with perspectives that let us walk and dance right along with him. 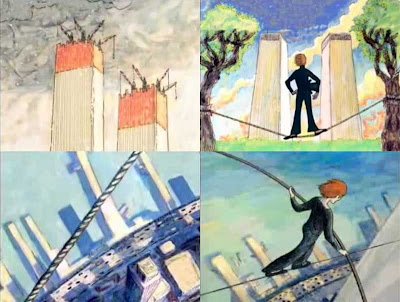 But the book is so much more. At the beginning of the story, the towers are just there, waiting—much like Mount Everest for Sir Edmund Hillary. An amazing, soaring structure, yes, but a vehicle for Petit to do his art. It is only on the last spread that we get a hint of Gerstein's impetus. He writes simply, “Now the towers are gone,” showing a skyline that would look full if you didn’t know better.

The final page has a misty image of the towers united by a tiny Petit on a tightrope. It says, “But in memory, as if imprinted on the sky, the towers are still there. And part of that memory is the joyful morning, August 7, 1974, when Philippe Petit walked between them in the air.”

Pretty perfect. By celebrating Petit’s daring-do, Gerstein also celebrates the vision of people who thought big and built big. By commemorating Petit’s courage, he also commemorates those who clear-sightedly rushed in to deal with what turned out to be an even riskier situation.

By telling this story as he did, Gerstein reminds us that grief over anything or anyone’s destruction should never erase the pleasure caused by their existence.
Posted by Susan E. Goodman at 4:18 AM

Susan:
Beautiful book. Beautiful commentary on what it's all about!

Thanks Gretchen, I've actually thought about it a lot. Something wonderful happens when people say something important without sentimentality. It just lets the truth echo in the space where preaching or sap would have been.

Love this book. I saw a terrific speech by Mordicai at Vermont College. He talked a lot about his movie making background and how that influences his work as a picture book author. He's inspiring and very quotable. I filled up my notebook that day he talked!

Wish I would have heard him.

Terrific tribute and moving post, Susan. I know that book well. I believe that it is our job as nonfictin authors to create the power of the truth by artfully showing the facts without embellishment.

Its a really beautiful book.. I like it very much, because it have a lot of interesting and informative stuff...
Safe Online Games