My earliest memories of learning about the prehistoric era include an orange plastic Triceratops and the Flintstones. A few years later when a set of Time Life books about paleontology appeared on our shelves at home, the real story began to take shape in my mind. We didn’t have much instruction on the topic during my years at school, but I kept a casual interest going over the years by reading an article or book here and there.

When my longtime editor, Margery Cuyler at Marshall Cavendish Children, suggested doing a book of dinosaur jokes, that seemed like a fun project. It’s hard to pinpoint exactly what happened, but let’s just say things escalated a bit. After browsing through a few books, it became clear that I had missed out on a lot of wonderful fossil discoveries and insights made in recent years. (For a post about some of the resources used, click here.)

An aspect that jumped out at me was the number of books available and what topics are covered. Here are some very simple “infographics” to illustrate. In general, most nonfiction (and fiction) books take place within the context of recorded history, right?

Obviously these are not mathematically accurate proportions, but it conveys the idea. Prehistory is far bigger than History, in terms of the sheer number of years.

Then, when we look only at prehistoric time, the dinosaurs showed up 250–200 million years ago, then dominated the Earth for a relatively small chunk of Earth’s entire 4.5 billion years (minus 65 million years since the asteroid fell.)

However, when we look at the actual books written about prehistoric topics for children, it looks more like this:

This is my (perhaps long-winded) way of saying that there are a heck of a lot of books about dinosaurs, but the rest of prehistory? Not so much. I felt compelled to include the whole shebang in my book, or at least the highlights that would fit into a mere 48 pages. Without any further ado, here is my fall book, My Teacher Is a Dinosaur and Other Prehistoric Poems, Jokes, Riddles, & Amazing Facts... 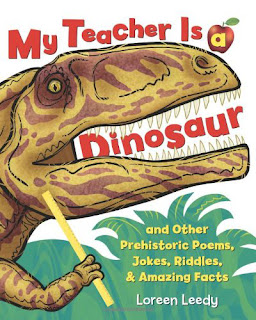 It begins with the newly-formed Earth under a hail of comets and asteroids, then deluged by millions of years of rain. The next spread shows the era of volcanoes, huge tides, and a moon so large it would almost require sunglasses (moonglasses?) Life appears in the form of microorganisms, with cyanobacteria being the most important because they made oxygen. Many pages and many incredibly diverse lifeforms later, the book winds up in the Ice Age.


Along the way, each spread has cinquain poems and/or longer rhyming verses, silly but topical jokes, riddles in the form of limericks, fun facts, and of course, full-color artwork of the fantastic array of plants and animals that once populated this planet, or in some cases still do. (Such as the coonties growing in our yard, a cycad plant whose ancestors grew during the Permian period.)

The poems include:
The Bad Old Days
Plant Pioneers
The Fish That Wanted Legs
Reptiles on the March
How to Stay Alive
Did Hadrosaurs Quack?
Doodlesaurus
A Warning from the Mammals


About the poem My Teacher is a Dinosaur...there was some opposition from the publisher about using it for the book’s title (too young? too insulting?) so just to be sure I read it aloud to a group of reading teachers. My editor did the same, and both groups overwhelmingly urged us to keep this title, so yay! While I intended the title to sound a little subversive, the poem itself negates the idiomatic meaning of dinosaur (i.e. old or outmoded) and favorably compares teachers to various dinosaurs. The first couple of lines should make it clear:

My teacher is a dinosaur, but I’m not sure which one—
could she be Gallimimus, who was always on the run?...


It took much more time to create this book than I originally expected, but (with all due modesty) it turned out to be unique, entertaining, and informative. My hope is that it will entice reluctant readers to explore its pages as well as enlarge the perspective of dinosaur-loving kids (aren’t they all?) For a peek at a spread featuring Brachiosaurus and Archaeopteryx, click here. To preview and download a coloring page of Allosaurus, click here.

Happy back to school, everyone!

I completely get why history is so well-represented in books, fiction and non, as opposed to prehistory. I also get why certain periods are over-represented. It's a lot easier to research Victorian London than any area 10,000 or 100,000 or 300,000 YBP.

What I don't get is why dinosaurs get the lion's share of the press. Mammals like the various proboscidians, glyptodonts, giant sloths, short-faced bears, aurochs, and oh yes - the primates, like homo floresienis, heidelbergensis, and sapiens are every bit as charismatic as dinosaurs and oh so much easier to write stories about! There's more to prehistory than dinosaurs followed by Neanderthals followed by cave painters (and novels with cave painters always use the outmoded hunting hypothesis) followed by the Egyptians. A whole untapped world lies waiting, its resources barely touched, and we keep mining the same old veins.

Love those square graphs, if that's what they're called!

Let's see, how many of those are in my book...proboscidians, glyptodonts, giant sloths (check)... primates starting with Darwinius and including Proconsul and Ardipithicus (check) ... and also nautiloids, sea scorpions, placoderms, pliosaurs, mammal-like reptiles, and the largest land mammal of all time, Paraceratherium ... just to name a few.

It's a rich vein, indeed...will have to include those other primates, short-faced bears and aurochs in another book (or perhaps someone else will get to it first!)

In my opinion, the reason that dinosaurs get so much press is that they appeal to two very strong motivators for interest in young children: 1) a sense of wonder, as exemplified by the Guinnes Book of World Records (kids love superlatives of any kind) and 2) their fears of mortality that are often addressed by fairy tales. Dinosaurs were very, very big and fearsome and they are very, very dead. It's an unbeatable combination.

I've just discovered your interesting non-fiction book review blog - and it is a treat.

I will need to include some non-fiction choices in my daily read alouds with my kids, so your site is perfect for selecting the best options.

Greetings from a fellow reviewer of children's books