From Song To Book

If I had my own jazz band, my new book, Meet the Howlers, would not exist. That’s because I first imagined it as a song. Specifically, it was song sung in a jazzy swing by a finger-snapping Frank Sinatra wearing a silver suit. Yes, I actually imagined that. (Fiction has no monopoly on strange book backstory, folks!)

The book started simply. There we were on a tower in the Panamanian rain forest. My nephews and I were watching howler monkeys and one of my nephews said, “He’s a howler.” It’s an innocent enough phrase. 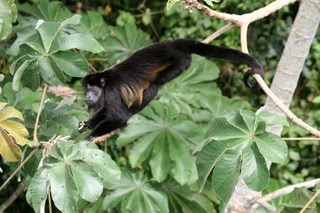 That’s all it took. One little alliteration can set me off. I started singing. “He’s a howler, dooby, dooby-dee-doh...” This became the refrain. (As you can now imagine, I am one of the world’s most embarrassing aunties.)

Once I had this melody, I needed verses. So, I sang those as well. My nephews contributed an idea or two, but mostly just looked on, skeptically. We often brainstorm book ideas together but the singing was a new thing. Later, at home, I did the major work of crafting the song. This included all the usual nonfiction steps of research and fact checking. Fortunately, though, I’d observed howler monkeys for years and also studied primatology at Duke University.

The song had rhythm and rhyme and facts. After some more struggling it had structure. Sorry, Sinatra, but the perspective of the song shifted to that of a child. My imagined narrator was a child bemoaning all the things wild howler monkeys can get away with a child wishes he/she could. Yet the book doesn’t really have a child as a character. That child is just in my head, the source of the nonfiction voice used in this expository piece about a howler family.

The problem with my song? Well, again, I lack a band. Where IS my band? Every girl needs a band . . . Anyway, the second problem was this song’s conversion to the picture book form. I’ve often lectured about the connections between song form, story form, and picture book form. (I discovered this song/picture book connection while on a long school visit drive when Loretta Lynn was on the radio. Her songs use a form called the Nashville turnaround which, I noticed, was a classic picture book structure.) 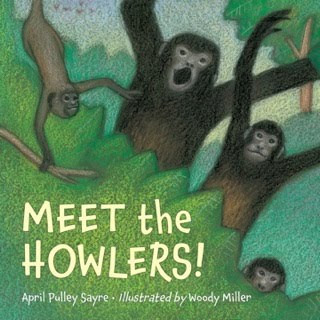 Alas, despite the similarities between songs and picture books, the differences can get you into a pickle during conversion. This, the book’s editor knows. The whole thing had a wild, syncopated jazz rhythm that she and I wrestled to iron out. It was in my head and I could have taught it to you in a minute. But it would have driven a reader mad. Next, we moved on to Woody Miller’s illustrations, which sparked new ideas for structural changes in the original text. And so the process goes!

Sorry, Sinatra, no new song. But we did get a beautiful picture book. And it's full of sounds—howler monkey sounds, not the sounds of swing or jazz. Now, if I could just get that original finger snapping rhythm out of my head . . .

(Note to librarians: Charlesbridge has a downloadable poster, “Hoot, Holler, and Howl for Books,” on the front page of their website.www.charlesbridge.com)

Posted by April Pulley Sayre at 3:15 AM

Terrific post, April, one that all picture book writers, experienced or newbies, should read. By the way, on a trip to Costa Rica, when the Howlers began their serenade, I taped them with an old MP3 player that had a microphone. Once back in New York, it was so much fun to go about town while listening to the Howlers. Jungle heaven in NYC!

April, what a great story! I'd love to see a youtube trailer for this book with your jazzy refrain in the background. Go on, girl, you can do it!

April, I was so intrigued by the concept (and the name!) of the Nashville turnaround that I had to google the term. I found this explanation:
". . . a country music staple in which the storyline is capped with a climactic twist, which serves to reshuffle everything leading up to it. When it’s done right, the turnaround delivers the payoff with the concision of poetry and the perfect symmetry of algebra. . . " (http://www.mygayweb.com/interviews/story/?ID=82) How clever of you to notice the picture book structure--thanks for pointing it out! And yes, every girl needs a band!

So when are you writing me the Loretta Lynn/Frank Sinatra picture book biography mashup?

I'm thrilled to find a great picture book post - thrilled. Thanks for sharing this story. I read it twice! :-)

Now I REALLY can't wait to read this book! I'm a morning person, so I loved the howlers that started my days when I was in Costa Rica. But my husband, a night person, wasn't nearly so excited about them. :-)

I saw your beautiful monkey book at ALA midwinter and loved it!