I admit it. I rudely interrupted my mom’s turkey dinner by being born on Thanksgiving during our family’s first ever Thanksgiving Goodstein Family Reunion. So many other babies followed this debut that our family has ballooned exponentially, and these days, between 90 and 130 Goodsteins from all over the world show up in one place every Thanksgiving to tell each other our best stories, take each other’s pictures, eat some food, preferably fattening, look at pictures of our own selves, eat again, play every conceivable kind of live music, perform bogus magic tricks in costume, eat dessert, and present plays and puppet shows and displays of acrobatic prowess. This is no great surprise, actually, considering that we’re descended from a long line of artists, musicians, actors, dancers, and shameless hams.

I’ve heard stories about our colorful family history all my life, but I’ve also read more amazing tales than you can shake a stick at because they’re written down in the Mischbucha Mirror. So what’s that (and how do you pronounce it anyway)? It’s a wonderful annual family newsletter that was first started by an 11 year old boy in 1981. Since everyone gets to send in his or her own contributions, it has gotten bigger and fancier and glossier and more colorful ever since. It’s handed out at each reunion in all its glory, and in its pages are a thousand tales. Here’s a tiny sampling. As the blogger, I get to start with my own part of the family:

One story told how my grandfather and a lot of other young men were abducted by the Cossack army during WW I, and they had to march on foot all the way from Poland to Manchuria eating only dry bread and sausages. My grandfather soon became a legend because he could ride on horseback at full speed while standing on his hands. The men had to ford all the rivers naked with their clothes and rifles on top of their heads and everyone got frostbite on their feet and their toenails fell off. 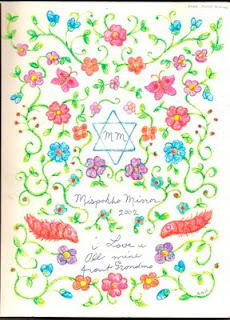 Another story told about a ship that sunk on its way to America and explained exactly how our feisty blond matriarch fought to stay with her own new husband in one of the few lifeboats.

In a story about Ellis Island, a relative with a long unpronounceable name wanted to get a short new American name, but hadn’t decided what it was to be. So he wrote “to be” on the list, and that’s how his last name became “Tobe.”

A Holocaust survivor wrote a riveting description of her years in Auschwitz as a young teenager. She told how she considered the number on her arm to be not a mark of shame, but a badge of honor when she was one of the few prisoners to make it through the war alive.

One highly memorable cousin showed us photos of his ornate tattoos and explained how he was jailed as a teenager for painting graffiti on New York subway trains. He is now a glowing superstar/ fine artist whose one-man shows of graffiti art appear in the finest galleries in Europe. 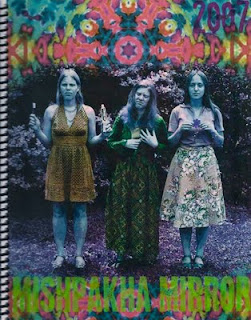 There are pages and pages of lavishly illustrated stories from small children, one 6-page cartoon series from a college student, photographs galore dating back to the 1800's, and plenty of poetry pages illustrated in crayon with Polish folk art by my own ancient grandmother. A renowned violin maker cousin told us the difference between an early and a late Stradivarius. Another wonderful story was laid out by a former WW II navigator who safely guided his pilots from Africa to a tiny airport in Brazil by flying across the Atlantic Ocean through three thunderstorms without a radio. They landed with only 6 minutes of fuel left. I've even compiled a number of very adventurous stories about my father’s own family. I used them to help write a book called Escaping to America: A True Story, which among other things explains how the family was almost captured by soldiers when they escaped from war-torn Poland in a hay wagon in 1921.

Why am I telling you all of this? Because every family on the planet has stories just like ours, including you. Happy or sad, devastating or embarrassing, bizarre or hilarious or mundane, they’re the best stories you can ever imagine because they relate to you personally. (And please note that they are all nonfiction!) So I hereby propose on this week-after-Thanksgiving that each of you readers of every age take a firm grip on your next golden opportunity whilst you still can and write your family’s best stories down one at a time. Interview your older and younger relatives too by making them tell you everything you wanted to know but were afraid to ask. Raid ancient letters, funny emails, old photos, older drawings made by little kids, and even tacky souvenirs from some vacation spot and include them along with the rest. Be sure to add the dates! And remember that even stories from this week will work just as well. Have a blast and please let us know what you find. 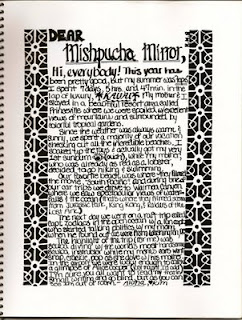 1996 page written and illustrated
by my young daughter Kim

Posted by Rosalyn Schanzer at 11:35 PM

Oh, how wonderful! You must be beyond proud! What amazing, not to mention interesting, lot of family members you have.
Maureen. www.thepizzagang.com

Fabulous! Our relatives on one side of the family have been having reunions for over 100 years, and there are some funny and amazing stories. It's true that we need to keep writing them down.