The first Monday of the month seems to be a good time to talk about all things Nonfiction. We hope to make this a regular feature on the blog. Our bloggers will share news about their own books or speaking engagments, their critique buddy's new book, new books they've heard about but don't have time to blog about, local nonfiction events people might be interested in, etc.


We'd like to ask readers to add their noteworthy events in the comments. Read a good book? Reorganized the nonfiction section of your classroom? We'd love to hear about it.

I found a hidden gem of a resource for nonfiction books this weekend. On a visit to the Brooklyn Botanic Gardens I discovered a wonderful collection of nonfiction in their gift shop There were books on everything from nature to New York City, both small presses and large publishing houses. I was happy to see books by April, Steve, and Sneed among their picks. If you are looking for another place beyond the big chains to find an interesting book, don't forget about a gift shop at a nonprofit--in this economy, it's a great way to support them and expand your nonfiction collection.

The Washington Post and the Children’s Book Guild of Washington, D.C. have announced that the winner of their 2009 Award for Nonfiction is Susan Campbell Bartoletti. Tickets for the Award Ceremony on April 4 are available at http://www.childrensbookguild.org/
Susan Bartoletti will speak about her books, many of which address the role of children during difficult periods in world history. Hitler Youth: Growing Up in Hitler's Shadow was a Newbery Honor book as well as a Sibert Award winner. As a salute to her Sibert Award winning book Black Potatoes: The Story of the Great Irish Famine, Irish music and dance will be the featured entertainment. A reception with drinks and refreshments will follow the performances.
AWARD CEREMONY
Saturday, April 4, 2009 at 2 P.M.
National Geographic Society
Grosvenor Auditorium
1145 17th Street N.W.
Washington, D.C. 20036
Metro: Farragut North

I am writing from Indonesia, where I am visiting the Jakarta International School for two weeks of speaking (and playing). For me, 2009 is a big year for international speaking appearances. At the time this is posted, I will be home, but only for a few days before heading back to Asia. For a full month beginning March 9, I will be visiting the Singapore American School, the International School of Kuala Lumpur (Malaysia) and the Surabaya International School (Indonesia). In addition, I’ll be a speaker at the East Asian Regional Council of Overseas Schools (EARCOS) Teacher Conference in Kota Kinabalu, Borneo. I have always had splendid experiences at international schools. I love the diversity of students and staff, as well as the high academic standards and a curriculum (most use the International Baccalaureate, or IB, curriculum) that values inquiry and creativity. And the food is usually excellent!

But why am I going home at all between two trips to the same faraway part of the world? Well, that’s my other news. I am traveling back to attend an award ceremony near Los Angeles. I am the recipient of the 2009 Leo Politi Golden Author Award, given to the author with the largest number of books selected for inclusion in The California Collection, a list compiled by the organization California Readers (which is also the sponsor of the award). I’ll be returning to the States in early April. In that month and May I’ll be speaking at schools and conferences in California, Virginia, Washington DC, New York, Massachusetts, Florida, Wisconsin and Iowa. I still have a few days open if there are any schools desperately seeking an author.

Missing Math: A Number Mystery has been awarded a Bronze medal by the Florida Book Awards in the Children's Literature category. The honored books will be featured in the summer issue of FORUM, the Florida Humanities Council magazine. Also, I started a blog about my books and other creative activities called Loreen Leedy’s Studio:http://studioloreen.blogspot.com/

On Saturday, March 14 at 1:30 pm Tanya Lee Stone will be discussing her new book about the "Mercury 13" women, Almost Astronauts, at the National Air & Space Museum in Washington, DC, for their annual Women in Aviation & Space Family Day. The book was released on Feb 24, and has received 3 starred reviews to date. While in DC, she will also appear at Politics & Prose on Friday, 3/13, 10 am, and Saturday 3/14 at 10:30 am.
Link to NASM event: 2009 Amelia Bloomer List of Recommended Feminist Literature - link tohttp://ameliabloomer.wordpress.com/2009/02/10/2009-amelia-bloomer-list/

From Deborah Heiligman:
I was interviewed on NPR's Morning Edition about my new book, CHARLES AND EMMA: The Darwins' Leap of Faith, on Darwin's birthday, February 12. Here's the link. http://www.npr.org/templates/story/story.php?storyId=100597929 That interview was part of a longer one that Robert Krulwich (a genius of an interviewer!) did with me, and he sent out more of it on the Radiolab podcast. http://blogs.wnyc.org/radiolab/2009/02/24/darwinvaganza/nvaganza/
Vicki Cobb's new six-book series Body Battles: Your Body Ba 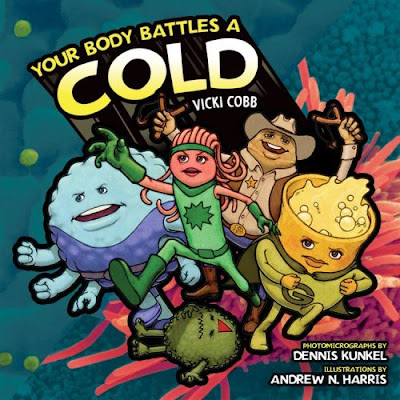 Posted by Linda Salzman at 7:32 AM