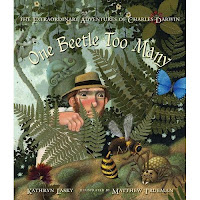 Trust Kathryn Lasky to be first up with what may end as one of the year’s best— One Beetle Too Many: The Extraordinary Adventures of Charles Darwin. It’s a sumptuous party for He-Who-Must-Not-Be-Named in certain swaths of the population. The title (which, with a vowel change, could have been One Beatle Too Many: The Story of Pete Best) refers to the famous incident in which young Charles found himself with three rare beetles and only two hands. Showing his dedication early on, he popped one bug in his mouth until he could get to his collecting bottle. The text goes on to shape Darwin into a flesh-and-blood being, and explains the “evolution” of his theories in ways that go down easily. Despite an abrupt ending (without even an author's note to provide more context), this scores points for addressing head-on how evolution fit in with Darwin’s religious beliefs, what creationism is, and the controversy hinted at by Lasky’s dedication: “In celebration of children, whose boundless curiosity gives them a right to know their history on Earth.” Matthew Trueman’s illustrations in mixed-media (the media including weeds and wildflowers) are to drool over (Candlewick, ages 9-12). 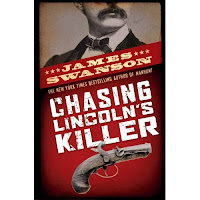 Among the millions and billions of Lincoln titles (of which I will have one, Abraham Lincoln Tells a Joke, in 2010), one of the most un-put-down-able is Chasing Lincoln's Killer. James L. Swanson has taken his adult bestseller Manhunt: The 12-Day Chase for Lincoln's Killer and refashioned it with verve for young adults. “Chase” is the operative word—this search for John Wilkes Booth and his conspirators moves at a rip-snorting clip, aided by lots of just-what-you'd-want-to-know details and an energetic design in sepia printed on creamy stock (Scholastic, ages 12 and up). 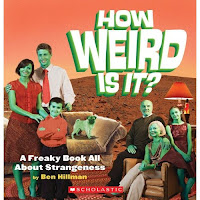 A big “wow” goes to How Weird Is It? A Freaky Book All About Strangeness by Ben Hillman. With alluring chapters like “Fungus Is Family” and photos cleverly Photo-shopped for maximum drama, this looks like a tabloid-y item you might hand to the most reluctant of reluctant readers. Surprise—it’s a science book. A real one, with unsourced but fascinating information about neutron stars, the Big Bang, dark energy, plagues, ghost particles, bizarre animals, what Martians might look us (us), all the latest hot topics in science. For any reader, reluctant or otherwise (Scholastic, ages 8-12).

Finally, we say farewell to 2008 titles (while wondering if the ALA committees will reward any of them come January 26). My apologies to the ones I didn’t get to, like Brenda Z. Guiberson's purely poetic Ice Bears… the dreamy All About Sleep From A to Zzzz by Elaine Scott (drawings by John O'Brien!!)… the truly niche-filling Sing My Song: A Kid's Guide to Songwriting by Steve Seskin... Sandra Markle's innovative Animals Christopher Columbus Saw: An Adventure in the New World…. what else did I miss???
Posted by Kathleen Krull at 3:15 AM

One Beetle sounds wonderful--I shall add it to my list! Thanks.

For 2008 great books, I'd like to add Sid Fleischman's The Trouble Begins at Eight:A Life of Mark Twain in the Wild Wild West. Not to take away from Fleishman's brilliance, I think he channeled Twain's voice in this book!

Thanks, Gretchen - somehow I have not seen Sid's book yet, but I have no doubt I will love it when I do - a great writer combined with a great subject.