Andy Warhol’s allotment of fame came in two installments for me this fall. My latest book, Jeannette Rankin: Political Pioneer has gotten nice attention this year: several notable lists, two awards, and one finalist. Who knew when I began writing it several years ago that this would be the year of the political woman? Not I.

The Children’s Literature Council of Southern California’s award ceremony was preceded by a scrumptious brunch at the Bowers Museum of Art in Santa Ana. Masks and sculptures from Oceania lined the room; a wall of window looked out onto an Asian-themed garden. Then we processed to an auditorium where authors and illustrators of various genres gave five-minute award acceptance speeches, mine for an Inspiring Work of Nonfiction.

As a member of this congenial group of librarians and authors for the last decade or so, I’d harbored a secret wish to win their award – and now I had done it. I’ve been a public speaker for decades. I’m at ease speaking to kids in schools, college students in classrooms, the general public in all sorts of venues. But this was different. I surprised myself by getting choked up as I spoke to my peers who were honoring me and my work.

Five minutes and it was over.

Two weeks later, the Simon Wiesenthal Center/Museum of Tolerance gave me the first Once Upon A World Award for young adult literature. (Their picture book award is thirteen years old, won this year by Ellie Crowe for Surfer of the Century: The Life of Duke Kahanamoku.) This was an afternoon event, open to the public and filled with winning-book-related events. Children made campaign buttons in an art activity room. (Jeannette Rankin was our first Congresswoman.) A storyteller narrated some of Rankin’s life in another room filled with beanbag chairs. 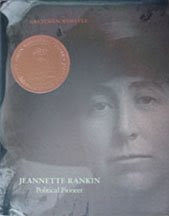 At the ceremony itself I did a ten-minute monologue as Rankin, wearing period hats. Then came the award and photo-op (no choking-up this time,) followed by a reception [see recipe below] and signing, then a dinner party at the elegant home of the award’s sponsor. And my book now wears a gold seal.

Between those two events, I traveled to Missoula (Rankin’s hometown) for the Montana Festival of the Book, a fun-filled two-day event featuring talks, panel discussions, readings, and signings by 140 authors, mostly Montanans who knew each other. Film screenings, art exhibits, and a poetry slam provided entertainment in the evenings. I spoke on two panels with biographers, novelists, and librarians – and paid a school visit to students who, unlike most kids, had already heard of Rankin, a Montana heroine. All that and gorgeous autumn weather -- golden glowing cottonwoods and larch trees -- made for a memorable weekend. (Hanging out with my son, who lives there, was an added bonus.)

I love talking about books. I love being surrounded by other writers and I was happy to be just one of 140 in Montana. But every once in a while I do like that dollop of icing on the cake – see below – when I and my books are the center of attention.

Recipe for Literary Icing
The folks at the Museum of Tolerance created a Jeannette Rankin edible book cover cake! Here’s how they told me you do it:
1) Scan the book cover.
2) Print it onto a sheet of edible rice paper (with edible food coloring.)
3) Lay carefully over a large sheet cake.
4) Eat! 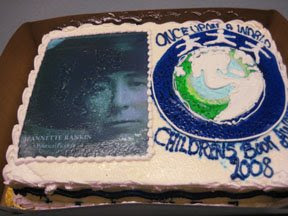 Congrats on your book and all its awards!

I found this link for edible rice paper.
http://www.sugarcraft.com/catalog/misc/waferpaper.htm
But I wonder what kind of mess it leaves in your printer or if you need a special printer. It's the same stuff used on the almond nougat candy I had every holiday as a kid.

Linda: I believe you need a silk screen operation or something like that, not a computer printer to do the job.