Certain Remarkable Women, and One Fartiste

Fascinating information, distilled into age-appropriate language, fully synthesized by a warm and witty authorial presence, narrated in a compelling voice… illustrated/visualized with flair… labored over by smart editors, copyeditors, fact-checkers, and designers….

Let’s consider some juicy titles so far in 2008.

Newcomer (to children’s books) Philip Dray tackles the harrowing subject of lynching in Yours for Justice, Ida B. Wells: The Daring Life of a Crusading Journalist. The executions of black citizens, completely outside the law, began almost as soon as the Emancipation Proclamation was signed, reached a peak of one almost every other day, and didn’t end until the 1950s. Sensibly, Dray clothes his topic within a biography of one courageous person, Ida B. Wells. She was born a slave in 1862, started teaching school at 16, and became a noted journalist. Publishing articles, giving speeches, often at great personal risk, she used her fame to shed light on the horrors of lynching, becoming the most effective crusader against it. The reader comes to know Wells in full detail, with six pages of solid information in the back matter for extra value. Stephen Alcorn’s stylized watercolors swirl with Wells’s energy and anger—just look at the cover with page after page radiating from her rising figure. Recent events in the news make this book a must-have for schools (Peachtree Publishers, 2008, ages 10-14).

Former mighty librarian Julie Cummins flexes her mighty research muscles in Women Daredevils: Thrills, Chills, and Frills. Male daredevils are all over the place, ho hum. But have you ever heard of May Wirth (billed as the Greatest Bareback Rider Who Ever Lived), Zazel (known as the Human Cannonball), Annie Edson Taylor (first person to go over Niagara Falls in a barrel), or Mabel Stark (“the world’s greatest tiger tamer and trainer”)? I haven’t, nor of any of the fourteen action-loving performers in this book. Their feats were all the more astonishing for taking place between 1880 to 1929, an era when women were supposed to sit still and not engage in sports, much less extreme ones. Cummins delves into her daredevils’ exploits, their motives, what they did in their off hours, and what else is known about their lives. A great gift for athletic kids, and a real contribution to women’s history, with Cheryl Harness’s illustrations leaping ecstatically off the page (Dutton, 2008, ages 8-12).

Befitting its rowdy subject, both text and art simply sizzle in What to Do About Alice: How Alice Roosevelt Broke the Rules, Charmed the World, and Drove Her Father Teddy Crazy!. Teddy would be Theodore, who famously moaned, “I can be president of the United States, or I can control Alice. I cannot possibly do both.” Alice liked to call her rambunctious style of living “eating up the world,” and it frequently got her in trouble at a time when proper young ladies had tiny appetites. Besides learning about one unusual woman, history-lovers will appreciate that the reader learns a lot about the President, his election to office in 1901 after Alice turned 17, and how and why she boosted his popularity. Barbara Kerley’s spirited storytelling skills are matched with newcomer Edwin Fotheringham’s ingenious depictions of one of the biggest celebrities of her day. Though we believed her dead since 1980, Alice strikes again! (Scholastic, 2008, ages 4-8).

You want more recommendations? I got plenty. What hot books have YOU noticed so far this year?

Finally—and for a book not about a woman and really silly—coming your way is my next book, called Fartiste. 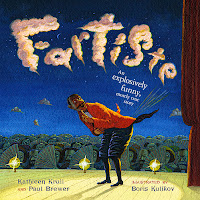 It’s a biography of a unique performance artist who had audiences literally fainting with laughter at Paris’s Moulin Rouge in the late 1800s. Joseph Pujol perfected “the art of the fart” by training his, er, muscles to mimic sound effects, tunes, stories. No, I’m not kidding, and yes, it’s all true. If you think this is gross, blame my husband, illustrator Paul Brewer, collector of extremes of information, amidst which he discovered Pujol, little-known now but in his day the most famous performer in the world. We co-wrote the story in verse, passing the manuscript back and forth to tweak the humor to its max. It’s being published by the brave souls at Simon & Schuster this June, with illustrations by Boris Kulikov that somehow quadruple the fun.

We think the book will have kids rolling on the floor. But what will the grown-ups say—the reviewers, teachers, librarians? Paul and I are on pins and needles (not the best image to associate with our promo item--whoopee cushions). Have we seriously gone over the edge?

Note: The links are to oh-so-convenient Amazon, but for actual purchases your local independent bookstore is the best friend a children’s nonfiction writer could have. I apologize for the lack of graphics, but just getting the links to Amazon in here nearly killed me.

Posted by Kathleen Krull at 3:54 AM

Kathleen, did my sons commission your latest?

Anything with 'artist' in the title works for me!

Can't wait to read it.

Oh dear, my resolution not to buy all the great books I see reviewed is being put to the test.

Oh, and your links don't seem to be working.

Ack - those links should be going to:

Thanks for posting the links again. Love the post and your new book looks like a lot of fun. Looking forward to reading it.

Oh my...my daughter's library already has Taro Gomi's Everyone Poops and the original Walter the Farting Dog. Your new book would make my daughter (my husband really) laugh with glee.

These early votes of confidence for FARTISTE are much appreciated!

And I'll take this opportunity to say how glad I am to be joining the others on this blog - some of my very favorite writers.

hi Kathleen,
I love your biographies, particularly your giants of science series, they are wonderful, thanks! I also love the fact that we both went to St. Joe's in Wilmette and were friends. Your success is great, keep writing.
all the best,
nancy hubbell ( now of Los Gatos, CA) formerly of Pinecrest ln in Wilmette.)